You are at:Home»Current in Westfield»Westfield Community»Westfield family strives for adaptive bike

Joanne Tedesco and her family relocated to Westfield in August 2019 after learning about the valuable services the area had to offer children with disabilities. Her daughter, Madelyn, was diagnosed at the age of 8 with a rare genetic disorder, DDX3X.

“There are only 477 known cases,” Tedesco said. “DDX3X primarily affects girls due to its location on the X-chromosome, and is linked to intellectual disabilities, seizures, autism, low muscle tone, abnormalities of the brain and slower physical developments.” 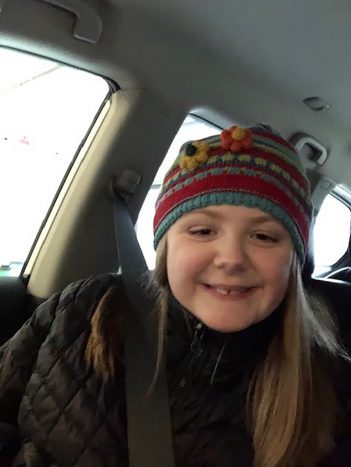 Tedesco would love for Madelyn to be able to utilize the Monon Trail like her peers, but due to her condition riding a bike on the trail isn’t possible.

“Madelyn does have a three-wheeled bike, but she isn’t aware of her surroundings,” Tedesco said. “So, I have to run alongside her so she doesn’t hit mailboxes or cars. Westfield is expanding the trail, but we can’t utilize it right now.”

Tedesco entered the Great Bike Giveaway, an annual program hosted by Friendship Circle, a nonprofit organization that provides children with special needs the opportunity to win an adaptive bike.

“Friendship Circle focuses on being able to give kids with special needs adaptive bikes so they can enjoy the joy of bike riding like any other kid,” Tedesco said.

In conjunction with Disability Awareness month in March, Joanne is asking the community for votes to win a tandem bike.

“This bike would give Madelyn a sense of freedom,” Tedesco said. “She loves being outside and experiencing the city from that vantage point.”

If she wins the tandem bike, Tedesco plans to donate the three-wheeled bike she currently owns to another family in need. Tedesco is a disability advocate and graduate from the IN Governors Council’s Partners in Policymaking Academy.