During his acting career, Rob Johansen has played multiple characters in the same show many times.

Johansen played as many as 16 characters in “The 39 Steps.”

“So, playing two characters isn’t too tough,” he said. 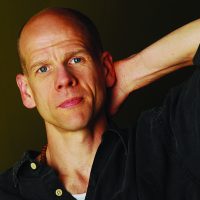 The Indianapolis resident plays the waiter and Michel in “Murder on the Orient Express” at Indiana Repertory Theatre. The performances run through March 29.

“I’ve tried to change them physically, vocally and energetically,” Johansen said. “My waiter is old and kind of a negative guy and has a bit of a Greek Accent. My main character, though, he’s had some tough times in his life, is a positive and energetic man, much more spry than my waiter. Of course, the audience knows it’s the same actor playing both roles, and that’s part of the fun of theater, seeing the range one actor can bring to several characters.

“The main thing I need to be careful of is getting away from reality and into broad comedy with the waiter. But (director) Risa (Brainin) is very good at making sure I don’t get cartoonish.”

Johansen also serves as fight choreographer for the play.

“My role as fight choreographer is to create realistic moments of violence for the audience to experience, while keeping the actors completely safe,” Johansen said. “We try to look at fights on stage more like dances that have every move and every bit of footwork pre-planned. The audience can think it’s violent, but the actors are working closely together to keep each other safe.”

Johansen said the show only has two or three moments of violence seen on stage.

“Shows with full fights require fight calls before each performance where the fight is done first at half speed, then just under show speed,” Johansen said.

Johansen said without IRT and Executive Artistic Director Janet Allen’s willingness to cast him, he would not be a professional actor.

“I’m not sure if I could have been an actor anywhere else,” Johansen said. “The size of the community was nurturing to me, where another arts community might not have been as attractive to me. So, my relationship with IRT is dear to me. When I do ‘Christmas Carol,’ I get to celebrate a holiday with a huge part of the city and so many students.

“And to hear people talk about so many of the 48 shows I’ve been a part of reminds me that even though a show closes, the effect it has on people remains.”