You are at:Home»Current in Carmel»Carmel Community»Developers ask to add commercial node, more housing to Jackson’s Grant in Carmel

The developer of Jackson’s Grant is asking the Carmel Plan Commission to rezone 20 adjacent acres to expand the neighborhood with more homes, townhomes and a commercial node. 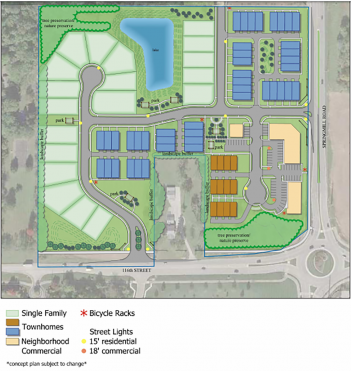 An expansion of the Jackson’s Grant neighborhood is proposed to include single-family homes, townhomes and a commercial node. (Submitted photo)

Jackson’s Grant Village is proposed on the northwest corner of 116th Street and Springmill Road. Republic Development is requesting a rezone from S-2/Residential to a Planned Unit Development, which would allow for a variety of uses.

The commercial node is proposed near 116th Street and Springmill Road. Developers said it will provide up to 20,000 square feet of neighborhood service and professional office use.

“Republic envisions this node as an amenity for the nearby residential areas and anticipates uses such as a coffee shop, art gallery, delicatessen, childcare, fitness studio, professional office, co-working space or similar uses,” planning documents state.

Approximately 1.2 acres of existing wooded areas in the southeast and northwest portions of the site would be preserved.

The proposal has generated feedback mixed feedback from neighbors. Stableside resident Gus Navarra started a change.org petition against the rezone, citing increased traffic and the neighborhood’s proximity to The Bridges shopping area on the south side of 116th Street as reasons high-density housing and retail isn’t needed in Jackson’s Grant. The petition had more than 240 signatures as of March 12.

Other neighbors favor the proposed addition, submitting letters of support to the plan commission.

“Republic has done a wonderful job with Jackson’s Grant and we are confident that they will continue the project with the same high standards,” stated Cheri Alexy, a Jackson’s Grant homeowner, in a letter to the commission.

The plan commission is scheduled to discuss the proposal at 6 p.m. March 17 at Carmel City Hall.