You are at:Home»Current in Fishers»Fishers Community»Parrish to get national spotlight

Hamilton Southeastern senior Sydney Parrish’s quest for a repeat Class 4A state title ended in disappointment with a loss to rival Fishers in the sectional championship.

Yet, she will still represent Hamilton Southeastern a few more times, including in the nation’s most prestigious all-star game. Parrish, who will play for the University of Oregon next season, is the only player from Indiana selected to the McDonald’s All-American boys or girls teams this season. The game is April 1 in Houston. 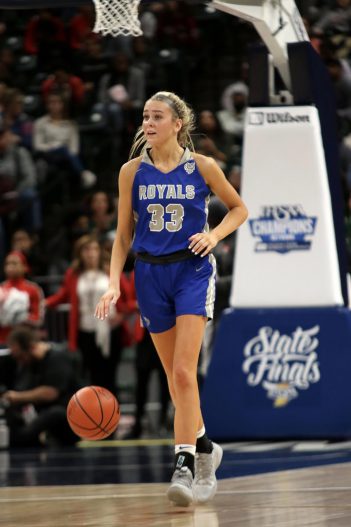 “It’s was a big goal of mine. When the day came, I didn’t know what to expect,” Parrish said. “I’m just really honored to play with the top 24 (high school senior) players in the country. It will be a really good experience before heading to college.”

Parrish, who was ranked 10th in the class of 2020 by ESPN, also was chosen to play in the Jordan Brand Classic game March 27 in Chicago.

Parrish recently discovered she had a slight fracture in her left wrist on her non-shooting hand, but said it should be fine with rest and she will be able to play in both games.

“Sydney can do so many things and I think her ability was more on display this year than any other year,” Royals coach Chris Huppenthal said. “There was a lot of emphasis on committing two or three bodies on her. Her numbers on scoring still went up and that’s a credit to how good she is.”

Huppenthal said Parrish is very supportive of her teammates.

“She is the total package when it comes to her character and athletic ability, just a kid you want to have around on your team,” Huppenthal said.

Parrish is one of the frontrunners for Indiana’s Miss Basketball, awarded to the top senior. Parrish was named the Gatorade Indiana Girls Basketball Player of the Year for 2019, but Northwestern senior Madison Layden was recently named the 2020 winner by Gatorade. Lawrence North edged Northwestern in the Class 4A state final Feb. 29.

“If you ask me, I’m going to be scratching my head at the end of the day if Sydney doesn’t win it,” Huppenthal said. “If you look at the schedule we play and what she had to do every night is remarkable.”

Parrish is pleased with the progress she has made.

“Some people just tagged me as a shooter,” she said. “But I think I got to the post a lot and worked on my post game and bringing the ball up as a point guard and showing my skills that way.”

Parrish said her main goal for her freshman year at Oregon is to see where she fits in with the Ducks.