Makenzie Hart grew up believing she wanted to be an actress. It took some time before she realized filmmaking is her true passion. 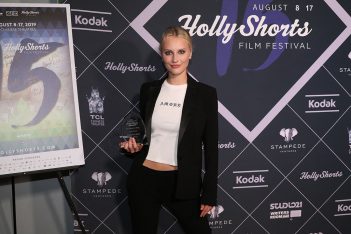 “A lot of acting is out of your control,” she said. “People are telling you who you are, what to be, and all that goes against my core personality. I want to define myself. I found a more comfortable (fit) behind a camera.”

The 2015 Carmel High School graduate’s college senior thesis project is a film co-written alongside her partner Jordan Pollak. Hart directed “Spin Cycle,” which was an official selection in the 15th Annual Oscar-qualifying HollyShorts Film Festival in August 2019. Hart directed the film that won Best Shot on Film at the festival. It was shot on 35 millimeter film, a dark film set in a laundromat.

“Part of that was artistic pursuit and part was trying to make ourselves stand out (by using 35 millimeter film),” said Hart, who graduated from the Studio School in Los Angeles, a branch of Hussain College. “It was very exciting to get that validation of my work. We were the youngest ones there by far.” 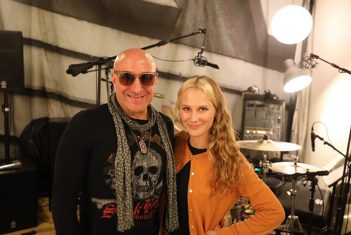 Hart and Pollak are now working on a full-length documentary on renowned drummer Kenny Aronoff, who was John Mellencamp’s drummer from 1980 to 1996. He also has toured with John Fogerty and Smashing Pumpkins and been a studio musician for many top acts.

“The documentary with Kenny happened very organically,” Hart said. “My partner Jordan and I got word of him starting a project through mutual friends. We heard there was a halt on production, so we offered to pick up the project and start traveling with him to shoot what he’s up to now. The documentary is going to be Kenny’s narrative, derived directly from his life experiences traveling the world and playing music with the best artists of all time. Documentaries take time and a lot of shooting, but we plan to have the documentary available to view in 2021.”

When she was in seventh grade, Hart moved with her younger sister, Mallory, and mother from Fort Wayne to Los Angeles.

“That was the part of the process we identified with because that’s who we saw on screen,” Hart said. “Little did I know there was so much more than that. I decided I wanted to come home and live a normal high school life.”

The year in Los Angeles looking for acting jobs was tough.

“I definitely took it too personally,” Hart said of criticism. “It took four years of high school for me to realize that just because I wasn’t in love with that part of the process doesn’t mean I couldn’t still be involved. Ultimately, everything happens for a reason. I would never trade any of the lessons that I learned.”

One aspect she did enjoy while in Los Angeles when she was younger was doing voiceover work and earned the part of Young Jock in “Jock The Hero Dog,” a 2011 animated movie that featured the voice of singer Bryan Adams as the older Jock, along with stars such as Mandy Patinkin, Ted Danson, Helen Hunt and Donald Sutherland.

“That was my claim to fame,” Hart said.

When she returned to Indiana, the family moved to Carmel because her father’s businesses were there. She started eighth grade at Creekside Middle School.

“I did the rest of my high school education at Carmel and I loved it,” she said,

During her four years at CHS, Hart said she was more interested in art and took every class the school offered. She also was involved with the school’s live television program.

“I still apply a lot of things I learned in my art classes to my filmmaking,” Hart said.

Hart said she expects to always be making it.

“I don’t think I’ll ever be satisfied with what I’ve done,” she said.