Metropolitan School District of Lawrence Township students are learning the true meaning of hands-on study at the McKenzie Career Center. In their culinary classes, students operate a restaurant in the career center that is open to the public.

Bernie’s Place originally opened at Lawrence North High School under a different name, but it changed locations when the McKenzie Career Center was built and was named after founder Bernard K. McKenzie. The restaurant previously was operated out of a classroom but expanded to a full commercial kitchen when the career center was remodeled in 2017. 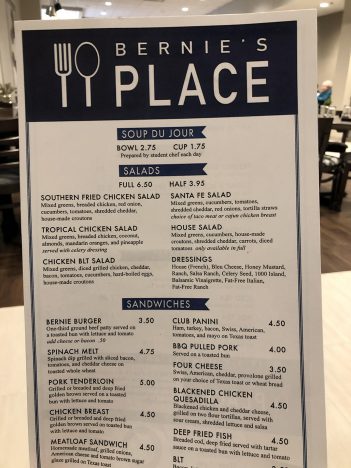 An example of the Bernie’s Place menu.

“The entrance is a public entrance, so on the other side is the Studio 75 salon (also operated by students out of the career center), and it’s open to the public, too,” Director of Communications Dana Altemeyer said. “Obviously, the hours are more limited because it’s based on student availability but anyone can come.

“This is a public restaurant.”

Many of the restaurant’s guests are teachers or school administrators, but the restaurant is slowly gaining popularity through word of mouth.

Culinary 1 students learn about the industry and receive certifications such as ServSafe, and Culinary 2 students run the restaurant. The work as servers, hosts and cooks, among other positions. They are not paid the hours they work count for college credit.

Because there are no paid employees, food prices are much lower than regular restaurants.

“There’s a large retired crowd that comes in,” Altemeyer said. “If you’re on (a) fixed income, you can come out to lunch for these prices and go and get hair and nails done (at Studio 75). We have a lot of folks come here and then go over to the salon. The traffic at Bernie’s has really increased since the renovations.”

Bernie’s Place is open 11 a.m. to 1 p.m. Wednesday through Friday while school is in session. Because students can’t accept gratuity, any tips go toward field trips and career-related experiences. For example, students have visited Cheesecake Factory for lunch with a behind-the-scenes tour of the kitchen.

“We talk about college and career pathways and graduating students who are ready for that next step for whatever it is,” Altemeyer said. “Perhaps they want to go right into the world of work. Well, they’re leaving us with skills where they can be gainfully employed. They are getting credit hours through Ivy Tech for this program.”

Each of the McKenzie Career Center programs has an advisory board to educate students.

“All of the programs have an advisory board, or professionals in the field, that come together once a semester to review curriculum,” Altemeyer said. “It’s like a professional audit of the program to make sure what they’re doing is relevant and current and what the industry expects.”

Thaddeus Payton, a junior at Lawrence North High School, is enrolled in the Culinary 2 program. His favorite part of working at Bernie’s Place is serving tables.

“I like being a server,” he said. “I’m used to talking to people, so I like doing that and it’s easy for me to do this.”
Payton plans to go into the culinary field after college and potentially start his own restaurant.
Approximately 180 students are enrolled in the culinary program at the McKenzie Career Center. Bernie’s Place menu items include salads, sandwiches and side options. Prices range from $3 to $4 per item, which are all a la carte. For more, visit mckenzie.ltschools.org. 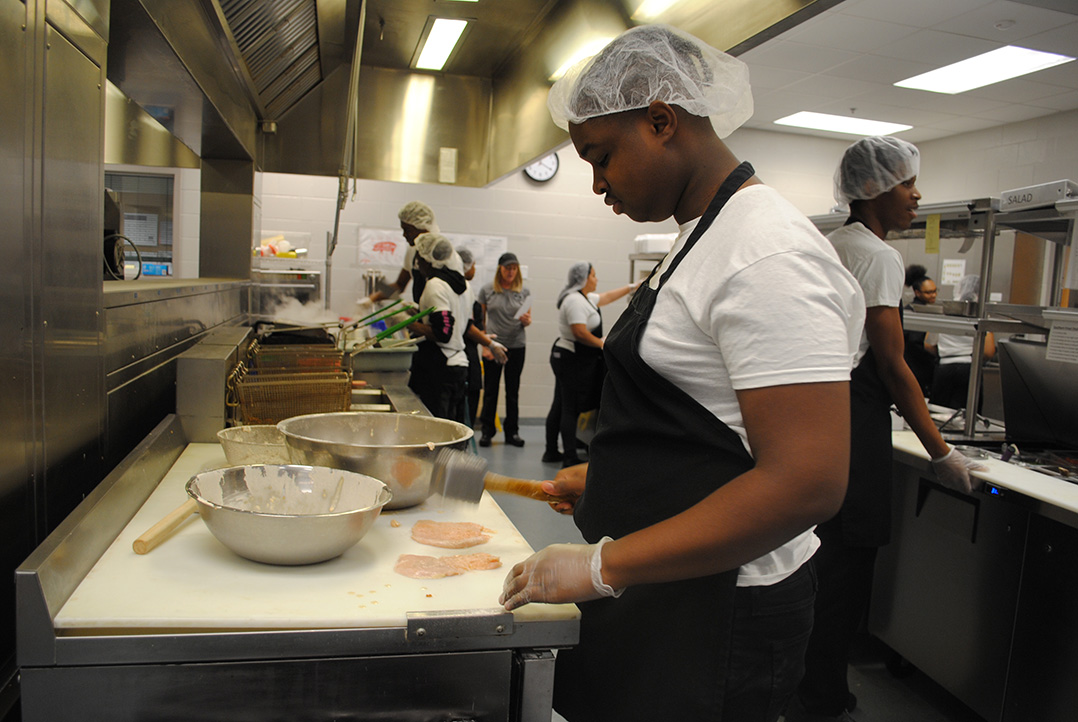 In 2017, the McKenzie Career Center underwent a $6 million upgrade that has benefitted Bernie’s Place.

In addition to creating a space on the west side of the building to house Bernie’s Place and Studio 75, the McKenzie Career Center also was equipped with a new camera system and new kitchen equipment and received an HVAC upgrade and improvements to the parking lot on the west and south sides.