You are at:Home»Current in Carmel»Carmel Community»Former Purdue president ‘left the world a better place’ 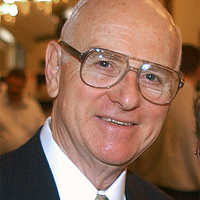 He endured all of it before reaching his teenage years, a horrific reality that instilled in him a desire to become a physician and ease the suffering of others.

Beering, a Carmel resident who died April 3 of non-coronavirus causes at age 87, accomplished his goal – by an exponential margin – in his post-war life as a doctor, researcher, Air Force veteran, advisor to the U.S. Surgeon General, physician for the nation’s first astronauts and President Dwight D. Eisenhower, medical school dean and, as he is perhaps best remembered, as the longtime president of Purdue University.

Beering, who left his position as dean of the Indiana University School of Medicine to become Purdue’s president, served in the role from 1983 to 2000.

Peter Beering, a Carmel resident and one of Dr. Beering’s three surviving sons, said his father’s formative years in war-torn Germany shaped and cemented his resolve to serve humanity.

“There was a very lengthy (Allied) bombing campaign, and their place was bombed, and it was bombed repeatedly,” said Peter Beering, noting that the family home was destroyed during one of the raids. “And on the back side of that, there was obviously tremendous destruction. Devastating injuries, injury and death at every turn, and that was one motivation.

“Later in the war when they were interred in a labor camp at the hands of the Nazis, there was additional suffering that he observed, and he vowed that he would do something to help mankind as a result.”

After retiring from Purdue, Dr. Beering served on the National Science Board and later became its chairman. Born Aug. 20, 1932, he was prededed in death by his wife of 58 years, Jane Beering, in 2015. He is survived by sons Peter, David (West Lafayette) and John (Westerfield, Mo.) Beering and five grandchildren.

Because of the COVID-19 pandemic, immediate services won’t be conducted but a celebration of life is planned when conditions allow.

“The memory that we are collectively hoping (for) is that he left the world a better place,” said Peter Beering, a Carmel attorney. “Most importantly, he considered himself to be in construction and that he was a builder of people, and I think that the legacy that both he and Mom had was that they were others-centered and sought to make everyone better and give them the tools to be better at whatever they did.”