Carmel attorney E. Davis Coots has received the Sagamore of the Wabash, the highest honor bestowed by the governor of Indiana.

Coots said he was “absolutely floored” when he found out he had been selected to receive the designation. State Rep. Jerry Torr, who nominated Coots for the honor, surprised the lawyer by dropping off the framed certificate at the Coots, Henke & Wheeler law office.

“I have been stunned ever since,” Coots said. “When I talk about it I get teary eyed.” 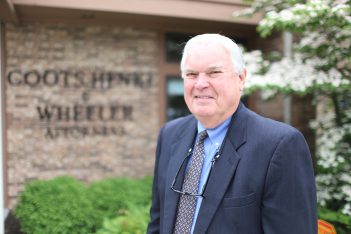 Torr said he decided to nominate Coots for the award after reading a story about Coots’ 50-year law career in the June 18, 2019, edition of Current in Carmel.

“I had known Dave for years, mostly though the Carmel Chamber of Commerce (now OneZone) but also through some business dealings,” Torr said. “But it was only after reading the Current article that I understood the full depth of his service to our community over several decades, and I thought to myself, this is exactly the kind of person that the Sagamore of the Wabash Award is designed to honor. Fortunately, the governor agreed.

“Every governor treats these a little differently, but I have only requested a handful during my tenure.”

Torr wanted to surprise Coots with the honor at the December 2019 OneZone luncheon, but Coots was unable to attend. Torr’s legislative duties prevented him from attending the January and February luncheons, and then the COVID-19 pandemic hit.

So, Torr delivered the award in person, but social distancing requirements prevented them from even taking a photo together.

Coots, a Westfield resident, said his firm will likely celebrate the honor after pandemic restrictions are lifted.

“The firm will probably have some sort of a reception once everybody is able to get out and about,” he said.

Coots worked as Carmel city attorney from 1980 to 1982 and served on the Carmel City Council and Carmel Plan Commission. Learn more at youarecurrent.com/2019/06/18/laid-back-lawyer-attorney-who-helped-shape-carmels-growth-reflects-on-50-years-practicing-law/.