You are at:Home»Current in Geist»Geist Cover Stories»Going as planned: Development in Lawrence continues despite pandemic

Despite the COVID-19 pandemic closing many businesses and canceling events, development is ongoing, especially near the Fort Benjamin Harrison area in Lawrence.

A few weeks ago, the Fort Harrison Reuse Authority closed on an apartment project called The Standard at Fort Ben through Cityscape Residential. The project includes 261 market-rate apartments.

“There are quite a few amenities,” Fort Harrison Reuse Authority Executive Director Aletha Dunston said about the project.

The Standard at Fort Ben is expected to break ground this spring. 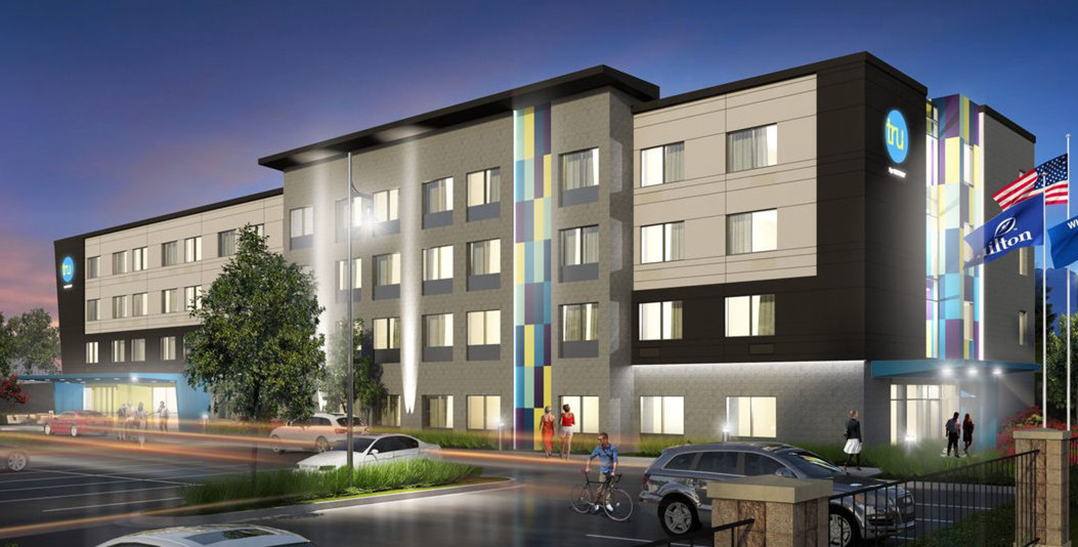 A rendering of the Tru by Hilton hotel.

Another project in the works is a Tru by Hilton hotel with 97 rooms on Otis Avenue.

“We are really excited about the parcel they picked because it fits into the walkable, dense, mixed-use community we are trying to create,” Dunston said.

The hotel will be closed to civic place off Otis Avenue where the city’s farmers market is held. Many events also are conducted in civic plaza.

“Visitors can walk outside and take advantage of that amenity,” Dunston said.

Dunston said the developments are still going forward despite the pandemic.

“As of right now, there have been no delays,” Dunston said. “The only difference is we are working from home.”

The hotel is expected to break ground in the spring. Dunston said 98 parking spaces will be on the hotel property that can be used for the entire site, which will include office suites.

“Only the spots directly adjacent to the hotel will be designated as hotel-use only. It’s shared parking for that entire site,” Dunston said.

When the hotel is complete, there will be 1.2 acres remaining in the parcel. The Fort Harrison Reuse Authority is discussing potential occupancy with a business, but it has not been announced.

“Currently, there are office suites and Jockamo (Upper Crust Pizza) out there, and on the 1.2 acres remaining, we have a restaurant group interested, but we are still actively marketing that property,” Dunston said.

Other projects in the works in the area include the $5.85 million cultural campus for the Arts for Lawrence theater renovation and construction of an amphitheater. The campus broke ground last year and is being funded through an Eli Lily grant.

“We have received the plans for review for the architectural review committee for that project,” Dunston said. “I think people will be excited to hear the musical swings will be coming back as a permanent installation at the end of summer.”

The Fort Harrison Reuse Authority is assisting the cultural campus construction by donating the World War II communications building behind Lawton Loop to be relocated.

“The City of Lawrence has been very impressed (with) the development of the reuse authority and we are looking forward to the upcoming development finishing up,” Lawrence Mayor Steve Collier said.

Library in the works

Other potential developments, such as the Indianapolis Public Library, are still planned.

“We are still working with the Indianapolis Public Library and excited to have them here. They will go to the east of the current office suites and Jockamo building and plan to develop a three-story mixed-use building there, potentially with a public parking garage,” Fort Harrison Reuse Authority Executive Director Aletha Dunston said. “And the library would locate adjacent to that. They’re negotiating opportunities for a partner to also be in their new building.”