You are at:Home»Current in Carmel»Carmel Community»Taekwondo grandmaster reflects on golden year

Garth Cooley had been searching for gold for some time.

The longtime Carmel resident and taekwondo grandmaster said he has reached the top eight in the World Poomsae Championships several times but never got a medal. Poomsae is judged on technique. 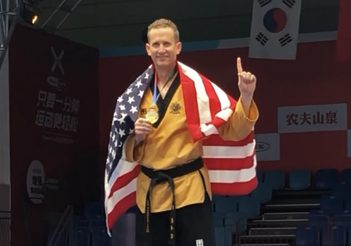 “I’ve participated in the U.S. national tournament several times,” said Cooley, who owns Korea Taekwondo Academy in Lawrence. “You have to win or be in the top echelon to go to the Worlds. They only take one person per category.”

“I made the team as an alternate and the first-place guy didn’t go,” Cooley said. “I went and did well, took a gold medal in the under 60 category. Going to the World Cup, having the chance to represent the country and coming back with a gold is a great accomplishment.”

The accomplishment earned the attention of the Carmel City Council, which recognized Cooley as an outstanding citizen in January.

In January, Cooley finished second in the Grand Slam (Team Trial) in Colorado Springs, Colo. He was an alternate for the  World Poomsae Championships, which was scheduled to be held in Denmark in May but has been canceled because of the coronavirus pandemic.

“To have the school operating perpetually for 46 years is a very rare thing,” Cooley said. “Yoon retired to California 20 years ago but he still makes an effort to come in every two months for the judging.”

Cooley, a grandmaster and an eighth-degree black belt, has been practicing taekwondo since 1981. He purchased KTA from Yoon in 1996.

“I became a student to an aspiring athlete to an instructor and then went to college and got a degree,” Cooley said. “But my heart was in this for competitive reasons. I was in a position to take it over and I did.”

Yoon traveled with Cooley to Seoul, South Korea, when he received his eighth-degree belt in June 2019. In eight years, Cooley can attempt to obtain his ninth-degree black belt.

Cooley’s wife, Julie, and children, Grant and Jill, are second-degree black belts. Jill is a Guerin Catholic High School senior and Grant is a Carmel High School graduate who is enrolled in IUPUI’s Kelley School of Business.

KTA has approximately 200 students, from 5 years old to adults in their 70s, Cooley said. He estimates 60 percent are from Fishers.

“We are doing online training at KTA using Zoom and we also offer our students an exclusive KTA video library with an assortment of various curriculum and training modules which will assist them in home training during this time,” Cooley said. “We are having a lot of fun interacting with Zoom but we miss the opportunity to have the students in classes as usual.”