Triton Brewing Co. Director and co-founder David Waldman acknowledges he never planned for the brewery to become a grocery. But when Eddie Sahm of Sahm’s Restaurant held a meeting with independent restaurant proprietors and provided the option, Waldman thought it was a bad idea.

“One option would be for (restaurants) to be a bodega (a small grocery),” Waldman said. “At that time, the grocery stores had a hard time restocking, and the food and supplies we bring in comes through the restaurant network versus the grocery network, so it’s a different supply chain.

“There was a lot of food just sitting and not getting out to anywhere because restaurants who are generally using those foods weren’t ordering or were closing up shop.”

Restaurant distributors were looking for places to sell their fresh produce, so when Indiana Gov. Eric Holcomb’s stay-at-home order was issued in March, Triton Brewery spent several days putting systems in place for the bodega. 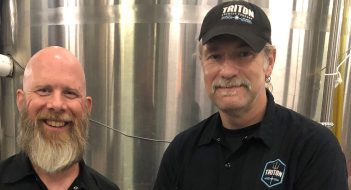 After four weeks of operating the bodega, Waldman is learning that produce  that’s in stock one week may not be the next.

“Last week, we had trouble getting mixed greens, but this week there’s an abundance of mixed greens but some of the proteins are harder to get,” he said. “We are not grocers. We are really brewers and, I guess, chefs. That’s what we do.”

Other items, however, aren’t cost-efficient for restaurants to sell.

“As people reach out to us, we are doing our part to try to bring in what they need, but we can’t do milk effectively because our cost on milk is around $4 a gallon, and you can go to Aldi all day long and buy it for $2, and it doesn’t make sense,” Waldman said. “People think I’m price gouging them but that’s with no margin. The challenge is there’s almost no margin on the grocery items, and that’s not what we are designed to do. I’ve designed a business plan and managed the money, and this is not going to get us to mid-June. It’s a challenge and it won’t be enough, but in the meantime, it’ll be something for our community. Maybe with a combination of things we can make it to the other side.

“I think all business owners in our predicament are feeling fairly the same way right now, so we’ll just keep fighting and hope to put the right combination of things together to be still functioning on other side of this.”

Waldman said although the brewery is doing its best, it can’t compete with a grocery store, but that’s not his objective.

“Our goal is for people who don’t want to go to the grocery, they can order online, pull up outside and pick up the materials without having to be close to anybody,” Waldman said. “A lot of it is about the safety of our staff, to keep everybody safe and continue to work through this and minimize the contact we have with our patrons, as much as that hurts us because that’s our bread and butter.”

For more or to order from the bodega, brewery or bistro, visit tritonbrewing.com.

Preparing to be a bodega 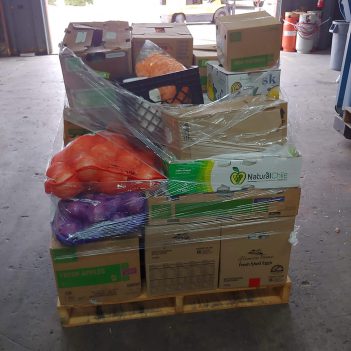 A shipment of produce to be sold at the Triton Brewing bodega in Lawrence. (Submitted photo)

Although Triton Brewing ownership never planned to sell groceries, it wasn’t too difficult to outfit the brewery for such a purpose.

“As a brewery, we have a bunch of walk-in coolers, and everything is stored at 37 degrees or colder,” director and co-founder David Waldman said. “Since we manage a restaurant, we are really good at rotating stock. Even though we are new to the grocery business, we are not new to food handling by any stretch of imagination, so we use all the safety guidelines.”