You are at:Home»Current in Carmel»Carmel Community»Still on defense: COVID-19 battle leads to surprising complications for LNHS coach

Jim Stanbrough spent 12 scary nights in the hospital fighting COVID-19, the worst of which he believes is behind him.

But in other ways, the battle has just begun.

Stanbrough’s journey included the discovery of four blood clots, which can quickly turn fatal if any one of them blocks blood flow in the heart or lungs. It took persistence from Stanbrough and his wife to get doctors to order scans to find the clots, and now that he knows they’re there, the Carmel resident continues to live with a sense of unease.

“It’s like you’re standing in the middle of an open field in a lightning storm and you don’t know if you’re going to get hit or not,” Stanbrough said April 15. “That’s the kind of feeling I had and still have to some degree.”

Stanbrough is taking blood-thinning medication to prevent the clots from causing additional problems. But his story highlights the importance of advocating for answers in a time of unprecedented uncertainty.

‘I was scared to death’

March started off well for Stanbrough, 64, an assistant coach with the Lawrence North High School boys basketball team. The Wildcats had narrowly defeated Warren Central on March 7 – their last game before the IHSAA canceled the rest of the state tournament – to win the sectional final and were among the favorites to win the Class 4A state title.

The next day, Stanbrough began feeling sick, and two days later he went to the doctor, who diagnosed him with the flu. After feeling better for a day, his health began declining again, leading to fever, coughing spells and lethargy. He was tested for COVID-19 on March 17 during a visit to the emergency room before being sent back home.

Two days later, he was sent home from the emergency room again after doctors told him he wasn’t sick enough to be admitted, even though X-rays and scans of his lungs showed them worsening.

His condition kept declining, so on March 21 Stanbrough went to a different emergency room and was finally admitted to the hospital. Doctors tested him for COVID-19 again, as he still hadn’t received the results of his first test. Two days later, results for the second test confirmed the diagnosis.

“I was hoping (it wasn’t COVID-19), but I expected it at that point,” said Stanbrough, who also had developed viral pneumonia.

At that point, Stanbrough was feeling as sick as he’d ever been in his life, struggling to breathe even while on oxygen and on the verge of needing a ventilator. Eventually, his condition improved, and he was sent home from the hospital on March 27.

But after a few days at home, he started feeling worse than before, this time experiencing severe chest pain. So, he went back to the hospital, where doctors discovered he had developed a bacterial pneumonia superinfection. Once again, doctors debated putting him on a ventilator but decided against it.

“I was scared to death,” said Marta Stanbrough, Jim’s wife of 30 years. “I thought there was a chance that we could lose him.”

As Marta, 57, watched her husband’s condition decline, she began contacting the medical professionals in her circle of friends to discuss the situation.

One of them, a pulmonologist, was concerned about the chest pain and urged her to ask her husband’s doctors to rule out a stress heart attack and pulmonary embolisms, or blood clots in the lungs. The doctors at the hospital didn’t feel Stanbrough’s situation warranted additional testing, but eventually they were persuaded.

“I started to cry, because I was so excited he was getting the scan,” Marta said. “I didn’t want to take someone home when this good friend seemed very concerned and I wouldn’t know what to do with someone who could possibly have one of these issues and there’s no warning.”

The tests ruled out a heart attack but revealed the blood clots: Two in the legs and two in the lungs.

Stanbrough is relieved to have caught the clots before they resulted in serious damage or death, but he expects it will be awhile before he’s back to full health.

“I’m feeling much better, but I know I have a long way to go,” he said. “I’ve had two doctors tell me it could take anywhere from three to four months to get back to 100 percent.”

The Stansbroughs’ biggest takeaway? Don’t be afraid to advocate for yourself and your loved ones if you feel something is wrong.

“You’ve got to keep pushing if you feel something needs to be done,” Stanbrough said. “We kept pushing to a point that found the blood clots that might not have been found if we had not pushed for those tests.”

Stanbrough continues to recover, but other people associated with LNHS basketball weren’t so fortunate.

Larry Rush, a superfan of the team who attended the sectional game, succumbed to the disease March 28. Jim DeSalle, who volunteered for the team in a variety of roles, died April 1.

DeSalle’s death was especially painful for Stanbrough, as the two men dined together March 7, the night of the Wildcats’ final game and the day before Stanbrough began feeling sick. Stanbrough has many unanswered questions about that night, including why one case was fatal while the other wasn’t.

“I think back to that dinner I had with Jim (DeSalle), but I have no idea,” Stanbrough said. “Did I give it to him? Did he give it to me? Did we both get it separately at some other point?” 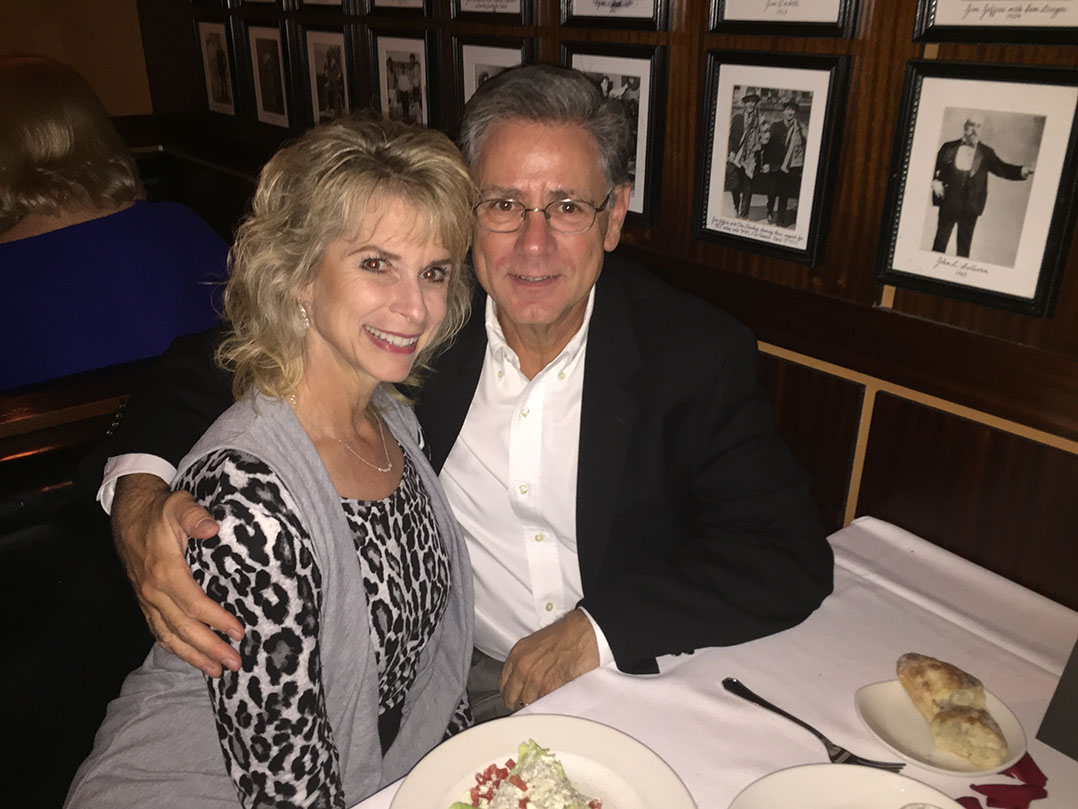 Carmel residents Jim and Marta Stanbrough tested positive for COVID-19, but their experiences with the disease greatly differed.

Jim, 64, spent 12 nights in the hospital fighting to breathe, while Marta, 57, said her only symptoms were the temporary loss of her senses of taste and smell and some light fatigue.

Marta said Jim is one of the healthiest people she knows. He rarely gets sick, she said, and if he does, he bounces back quickly while she takes a bit longer to recover.

“It’s ironic that we flipped the kind of COVID that we got,” Marta said.

Jim and Marta have three children in their 20s, with two of them staying under their roof during the pandemic. They said none of their kids tested positive for the disease.