You are at:Home»Current in Fishers»Fishers Community»Parrish gets state’s top honor

Hamilton Southeastern High School senior guard Sydney Parrish achieved her dreams this year, but it’s certainly not how she imagined she would.

“I been dreaming about being Miss Basketball and putting on the No. 1 jersey since I was a little girl,” Parrish said. 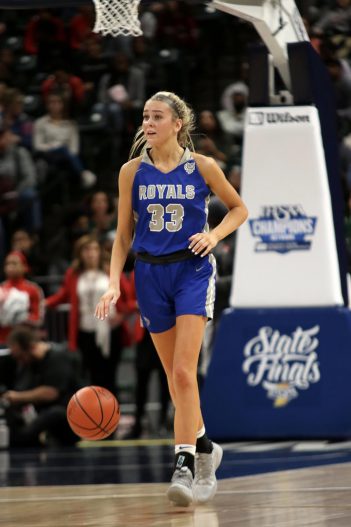 Parrish said she grew up watching all the Indiana Miss Basketball winners and All-Stars play.

“Getting the call that I was the 2020 Miss Basketball was amazing,” she said of the April 10 announcement.

The annual Indiana All-Stars boys and girls doubleheaders with Kentucky June 5-6 were canceled due to the coronavirus pandemic.

Parrish finished with 102 votes in voting of coaches and media. She received 19 more votes than Northwestern’s Madison Layden. Northwestern teammate Kendall Bostic was third with 22 votes.

Parrish, who will play for national power Oregon next season, also was the only Indiana girls player selected to play in the Jordan Brand Game March 27 in Chicago and the McDonald’s Girls All-American Game in Houston April 1. Those games were canceled as well because of the pandemic

“I was really upset when those things did get canceled,” Parrish said. “Everyone is going through a tough time and getting things taken away from them. Those are many dreams I’ve had since I was little. It’s an honor just to be named on the roster for some of those teams. I’ll always get to say I made the team. It’s unfortunate I can’t play in them.”

“When you look at her body of work with the schedule we play, I would hope that would distance herself against the competition,” Royals Coach Chris Huppenthal said. “That’s nothing against Madison Layden and Kendall Bostic. They are both wonderful players. It didn’t matter who we were playing, Sydney’s numbers were consistent, no matter who the competition was.”

Parrish averaged 24.8 points and eight rebounds per game this season as HSE finished 22-3, losing in a 4A sectional final to Fishers.

To stay sharp, Parrish has been shooting on the small court in her backyard.

“I’m just trying to run and stay in shape,” said Parrish, who is scheduled to participate in  a summer session at Oregon in July.