The Greyhounds might still have a shot in 2021, but that opportunity was lost this spring when the IHSAA was forced to cancel spring sports after schools were closed for the rest of the 2019-20 school year because of the coronavirus pandemic.

“It was especially disheartening for our seniors,” Greyhounds coach Joshua Shelton said. “They had a chance to be leaders on the team. It was their team. One of the things people don’t realize is there is so much that goes on in preparing for this season. It’s months and months of preparation for the spring golf season. We started the offseason in November and went through a difficult program designed to get them to peak in the spring.

“All the kids also did the golf-related training they do, starting last summer, but it’s a matter of perspective and there are a lot of things going on more important than golf and our kids have taken ahold of that message and they understand that.”

Two seniors, Clay Stirsman and Luke Prall, are still preparing for college golf. Stirsman will play at Wake Forest and Prall at Purdue.

Stirsman suspected the season was doubtful after the initial announcement school would be canceled until May 1.

“We were hoping by some miracle we’d get to play, but that was not the case,” Stirsman said. 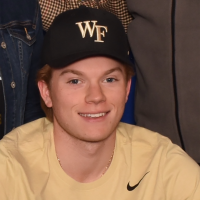 “There were a lot of guys ready to show what they had to offer,” Stirsman said. “We had two seniors (Katsis and Stitle) looking forward to playing in the postseason for the first time. We worked hard in the offseason. We were grinding and ready to go.”

Stirsman credits the program for his success.

“Being a part of this program has meant the world to me, and it’s the reason I’m going to play in the future,” Stirsman said. “Those memories mean the world to me. Obviously, you wanted to have the opportunity to three-peat, but some things are just bigger than golf. You can’t control the uncontrollable.”

Although disappointed, Prall said a positive is the way the seniors are leaving the program.

Unlike most businesses, golf courses are open in Carmel. 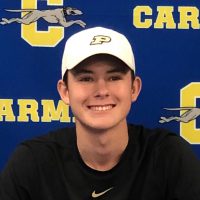 “I’ve been able to play a handful of times with my dad at Woodland Country Club,” Stirsman said. “Just trying to stay as sharp as possible.”

“I’ve been able to get to the course and work on my game, which is nice to get out of the house a bit,” Prall said. “I’m trying to prepare for summer tournaments if they happen. The last couple of months I’ve been grinding a lot and my game has been coming around. I’ve improved a couple of shots since last year.”