You are at:Home»Lifestyle»Health»State announces partnership to expand testing 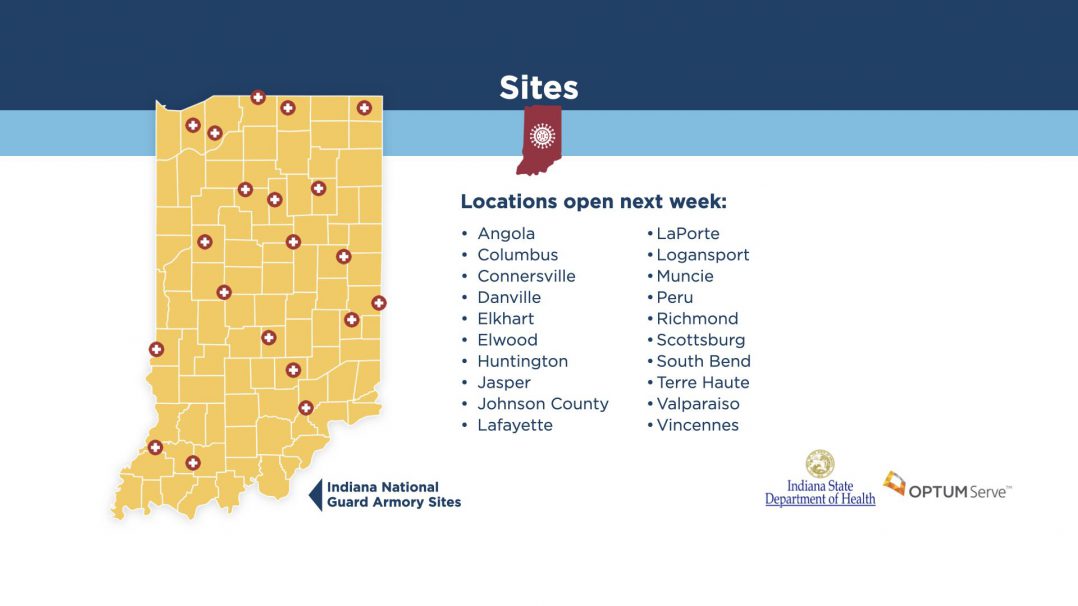 State officials announced OptumServe Federal Health Services would open 20 sites across Indiana in the next seven days and 50 in the next two weeks to begin large-scale testing of symptomatic Hoosiers.

State officials announced a $17.9 million partnership they expect would increase Indiana’s COVID-19 testing capacity within the next week.

In the first 30 days, state officials expect 100,000 Hoosiers will be tested, giving them what they hope will be a more accurate account of the spread of the new coronavirus in Indiana. An estimated 4,400 more Hoosiers will be tested every day in the partnership’s first week, and once all 50 sites are open, as many as 6,600 more Indiana residents will be able to be tested per day, according to the Indiana State Dept. of Health.

Testing will be available for any symptomatic Indiana resident, close contacts of positive cases and residents of congregate living settings, free of charge, though those with private health insurance are encouraged to bring their health care information when they are tested. Gov. Eric Holcomb said any decisions to extend the additional testing would be determined on a monthly basis.

Indiana is the second state to use OptumServe testing: California was the first.

Confident in the increased state of testing, Indiana health officials have recently moved to encourage any Indiana resident who believes they are experiencing COVID-19-related symptoms to be tested; previously, testing was reserved for essential workers and vulnerable populations experiencing symptoms due to a lack in either testing capabilities or resources.

“As much as we have done in the last couple of months, we have a lot more to do,” Indiana Gov. Eric Holcomb said during a press briefing.

On April 16, President Donald Trump and his coronavirus task force proposed guidelines for states to reopen their economies, which included three phases, each marked by 14 days of declining positive COVID-19 cases.

Holcomb said he plans to announce updates to his stay-at-home executive order, but he hasn’t indicated whether his announcement will include loosening any restrictions.

Previously, Holcomb said Indiana plans to monitor positive case numbers daily to track its progress toward meeting White House’s guidelines, partially through continued efforts to increase testing and building on its contact-tracing program with the help of county health departments. Holcomb has continually said the number of cases and “facts on the ground” would contribute to his decision-making process, as well as input from businesses around the state.

But today, Holcomb said his “north star” in determining when and how to open segments of the state’s economy will be hospital systems and their ability to care for patients.

“My north star is focused on is or is not the health care system that we have overwhelmed, and, to date, it has not been,” Holcomb said.

Currently, Hoosiers can get tested for COVID-19 without visiting a healthcare provider, according to state officials. Indiana State Health Commissioner Dr. Kristina Box is expected to issue a standing order for the test for any Hoosier who meets the criteria.

To sign up for an appointment at one of the forthcoming testing sites, Hoosiers must register through the Optum portal and self-report symptoms using an online screening tool. A hotline phone number will also be added soon, according to a press release

OptumServe will collect specimens and manage the testing and reporting of data. OptumServe is providing its own supplies, personal protective equipment, testing kits, staffing and lab. ISDH officials ensured the department would continue targeted testing of high-risk populations, as well as long-term care facilities with its strike teams.