A first song release holds personal meaning for Westfield Middle School eighth-grader Keegan Connor.
“Ever since I can remember, I’ve been singing, dancing and writing songs to express myself,” she said. “I grew up in New York City, attending a school with kids of various ethnicities. When we moved to the Midwest, I began to notice kids with blue eyes were getting comments on how gorgeous their eyes were, and no one seemed to mention my dark eyes. Being a very social kid, I wanted to stand out, but I didn’t feel like I did. That’s how my song, “Dark Eyes,” started blossoming into my message for equality and friendship.” 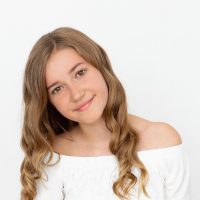 The song, which will be released on iTunes May 16, is meant to encourage others that everyone is more alike inside than they are different. Connor attended Indianapolis Public Schools for kindergarten after the move from New York. She then started first grade at Westfield’s Oak Trace Elementary.
“‘Dark Eyes’ is a symbol of our light inside and for equality,” Connor said. “Every kid has something to offer. They are special and have their own gifts and talents.  For instance, young kids just look for someone to play with them. They don’t pay attention to what they look like. We’re alike more than we are different, and it doesn’t matter where we live, we all have hopes and dreams.
“Eyes are one of the first things you notice about someone, but there’s more to people than what comes to the eye.”
Connor started writing the song two years ago writing the lyrics and had a tune in her head,” Connor said of her song.
“Then, I put it to paper and started messing around on the piano,” she said. “I’d work on it and then life would happen. I planned to release this last fall (2019), but didn’t know I had scoliosis, which threw me a curveball, and I needed surgery to correct it (in December 2019). I spent so much time on this song because I wanted it to be perfect, then I realized it just has to be me.”
Connor, 13, is a two-time winner in the CarmelFest Has Talent age divisions, winning in 2016 and 2018. She twice has appeared in National America Miss pageants.
Connor’s song preorder sales through May 15 will benefit two COVID-19 charities, United Way of Central Indiana’s COVID-19 Fund and Actors Fund COVID-19 Emergency Fund.
For more, visit music.apple.com/us/album/dark-eyes-single/1509504099.