You are at:Home»Current in Carmel»Carmel Community»Carmel man thankful for medical team that helped him beat disease that looked like COVID-19 — but wasn’t

Larry Schultz was rushed to the hospital April 3 after shortness of breath quickly advanced to respiratory failure. 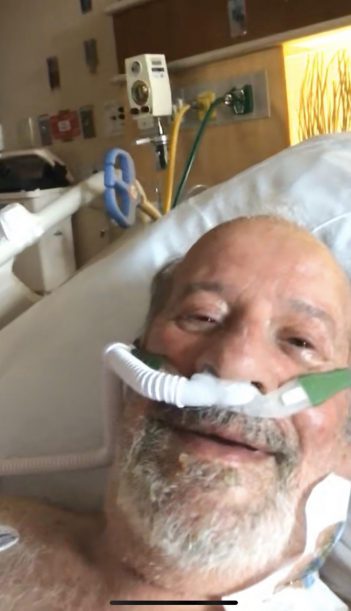 As the COVID-19 pandemic neared a peak in Indiana, Schultz, 76, went into a coma and was placed on a ventilator that would help him take the breaths his lungs were too weak to do on their own.

The Carmel resident developed severe pneumonia, and at times during his monthlong stay at IU Health North hospital, his family and medical team wondered if he’d survive.

Schultz had many of the key indicators of COVID-19, the viral disease many other patients battled nearby in the same hospital. His family was certain he had it, too, but much to their surprise tests for the disease came back negative — three times.

“The weird thing was he had the exact same symptoms as COVID at the exact same time everybody is rushing to the hospital with this,” said Susan Schultz, Larry’s wife. “We were not convinced, even after the third test. I was like, ‘No, I still believe it’s COVID.’”

Larry’s ordeal is a reminder that in the midst of a pandemic, medical professionals are still working to care for patients with a host of other health emergencies, whether they look like COVID-19 or not.

For Larry, a retired electrician who moved from Chicago two years ago to be near family, the trouble began shortly after a trip to the Windy City. He and Susan, who is considered high risk because she has multiple sclerosis, had been self-quarantining for nearly two weeks when Larry started experiencing shortness of breath and malaise.

By the time Larry got to his doctor’s office, he was in such bad shape that he was rushed to the emergency room, without Susan getting a chance to say goodbye. He went into a coma and was put on a ventilator that helped him breathe for more than three weeks.

Doctors were puzzled by his condition. They brought in a team of experts to examine him as they attempted to discover what type of disease was ravaging his lungs.

“It was like being on a roller coaster every day,” Susan said. “It was very hard for us, because we couldn’t see him at the beginning.”

Larry’s medical team set up video calls with the family, who was unable to be with him because of the hospital’s policy to not allow visitors during the pandemic.

“We FaceTimed while he was still on the respirator, so at least we could see him. It gave us a little comfort,” Susan said. “The nurses and staff at the hospital were incredible. They went out of their way to help us connect with Larry.”

Larry said it was difficult to battle the disease alone because he wondered what it must be like for his wife and three children to watch and worry from afar.

“I was scared for (my family),” Larry said. “It’s hard when you can’t have your family there.”

Larry finally got to see his family again on May 5 when he was released from the hospital after spending more than a month there. He’s at home now but has a long way to go to make a full recovery. He’s still on oxygen and steroids and is receiving nebulizer treatments in addition to physical and occupational therapy.

Meanwhile, the medical team that helped nurse him back to health is still working through a pandemic and treating other emergencies. Harvey said he’s seen a few cases of patients delaying treatment for emergencies unrelated to COVID-19 because they are worried about contracting the disease in the hospital, but he urges those who need treatment to not be afraid to seek it.

He pointed to Larry’s case as a good example of why fears of contracting COVID-19 by seeking medical treatment are largely unfounded.

“He was in our hospital for a month, and we didn’t infect him by accident,” Harvey said. “As far as I know, no (health care workers) in our ICU have been infected with COVID.”

IU Health North has protocols to protect employees and patients from COVID-19, and Harvey said the medical community is much better equipped to handle the disease now compared to when the outbreak first reached Indiana.

“We are learning more and more about this virus and the way it affects people,” he said. “As the year goes on, I think we’re in a much better position to help patients, even if we have another surge or if we have another relapse next fall or winter.” 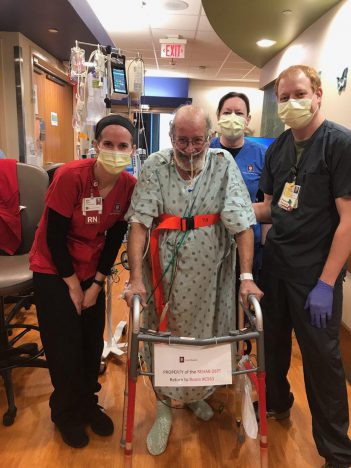 After spending more than a month battling severe pneumonia at IU Health North hospital, Larry Schultz thanked his medical team by sending them a video of himself taking his first steps a week after being released from the hospital.

“I want you to know that you are not my heroes, you are my lifesavers. You are my guardian angels. You got me to this part of my life, and I thank you so much. There aren’t words to express my feelings, my gratitude to you all,” Schultz, known in the hospital as Grandpa Larry, said in the video.

Hillary Halperin, Larry’s daughter, said the nurses told her they cried with joy as they watched it. She is thankful for the level of care they gave her father while also dealing with a pandemic.

“When we cannot be there holding our loved ones’ hands. To have them doing it for us is exceptional,” she said.