You are at:Home»Current in Fishers»Fishers Community»Winegar at home as new FHS coach

It wasn’t an easy decision for Garrett Winegar to leave Warren Central High School after one season as head basketball coach, but it was one that was best for he and his family. 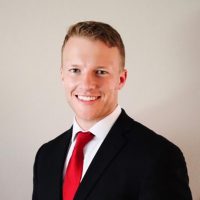 “We had a really good group coming back at Warren. No one expected us to be successful this past year because we lost seven of our top eight and we lost all our starters, but we went 18-6 and got to the sectional championship,” Winegar said. “We’re a couple of points away from beating Lawrence North in the sectional championship (losing 61-59). So, we had a surprising year and a lot of those guys are coming back. Basketball-wise, it was a tough decision. I like a lot of the young kids at Fishers. There is a talented group there and an opportunity there.

“There are talented kids coming up. I just believe with what we do there is an opportunity to build a really successful program.”

The Fishers job was attractive because Winegar and his wife, Sable, and son, Guyton, who was born in April, live in Fishers. Winegar replaces Matt Moore, who left after three seasons to take the Warsaw High School job. The Tigers, who graduated three starters, finished 18-7 last season. Fishers will have two returning starters in Jeffrey Simmons and Charlie Smith.

Winegar, who turns 29 in July, spent three seasons as a Warren Central assistant coach before becoming the head coach. The Warriors were unbeaten, winning the Class 4A state title in 2018. He previously spent two seasons as a middle school coach in Bloomington and one season as a Bloomington South High School assistant coach. Winegar, who will be the FHS physical education teacher, graduated from Indiana University. He played on Rochester High School’s Class 3A state runner-up basketball team in 2009.

“We believe that coach Winegar brings a dynamic set of skills that will add value to our physical education department, our basketball program, and our athletic department,” FHS Athletic Director Rob Seymour stated.

Winegar said he had a productive Zoom call with the players after being hired. Teams cannot work out until July 1 due to the coronavirus pandemic. He sent out a month’s worth of workouts to players June 1.

“We would like to be starting June practice,” he said. “That will hurt a new coach coming in with a new system. Not having the whole season is obviously going to be a challenge. I think we will be a team that gets a whole lot better throughout the season.”

Winegar said his system will be a little more up-tempo.

“Coach Moore is leaving behind an amazing foundation for us to build on,” he said.  “If we can score in the first 7 seconds, we’ll do that, but we’re not going to take a bad shot to do that. We still have to be disciplined to get the shot we want when we want it.”