The City of Carmel’s Brookshire Golf Club had a modest opening with a few nice days early in March. 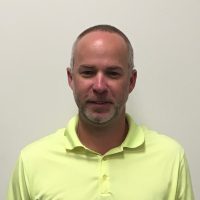 “Then the (coronavirus) pandemic hit and we shut down for a while,” Brookshire Director of Golf Brian Ballard said. “We opened back up with strict restrictions. We worked closely with Carmel Mayor (Jim) Brainard on how we could reopen.”

The restrictions have been relaxed as time has passed, but safety protocols remain in place.

“Play has picked up,” Ballard said. “People are looking for things to do, and golf is a relatively safe sport. We are not overly busy because until June 14, we can only do one person per cart. That limits our field size to 50 percent. We had a busy (Memorial) holiday weekend, but not as busy as if we could pair people up in carts. At first, we had to make it one person per cart. They now have the choice. If they want to ride together, they can. But we have to plan for one person per cart because we can’t run out of carts. We’ve had some business, which is better than none.” 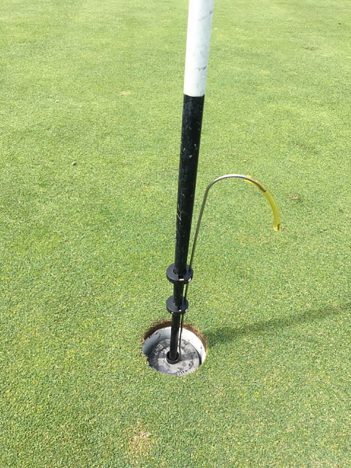 Brookshire Golf Club has installed an EZ Lift at each hole so that golfers don’t have to touch the flagstick. (Submitted photo)

A new device has helped enhance the experience. Ballard said the course was using pool noodles around flagsticks so the ball would bump out and no one would touch the flagstick. Ballard said golfers want to see the ball go in the hole.

“So, we ordered three EZ Lift devices, so you don’t have to put your hand in the hole,” Ballard said. “When you hit the ball in, you just take your putter and there is a little hook on it, and you bring it out of the hole.”

When it was deemed a success, Brookshire Men’s Club helped with the expense of getting one device for each hole.

“People like it. It’s a huge improvement over having the noodle in there,” Ballard said.

The club didn’t start using carts until May as golfers walked the course.

“Walking made it easier to be farther apart than the carts allow,” he said.

Ballard said the pro shop had been closed, which hurt business because early in the season is when golfers stock up on golf balls, tees and gloves. It reopened June 1.

“We can allow two people at a time in the pro shop,” he said. “The best rate for Brookshire is to go online, book and pay online. We’re offering a discount to do that, promoting a nontouch payment. You save $7 a person when you book online.”