You are at:Home»Current in Carmel»Carmel Community»Carmel student honored by Riley as Next Generation Philanthropist

Carmel High School’s Dance Marathon is no stranger to distinction with its longstanding title as the largest high school Dance Marathon in the nation in both participants and funds raised. Senior Alexis Calvert contributed to CDM’s tradition of excellence this year as she was named one of the Riley Children’s Hospital Next Generation Philanthropists. 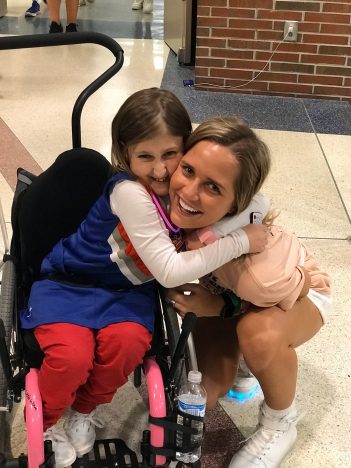 One of only 12 students to be recognized statewide, Calvert earned the award after four years of working with CDM to benefit Riley Children’s Hospital and The Caroline Symmes Endowment.

Calvert expressed interest in philanthropy from a young age and began participating in CDM as a freshman. As a junior, Calvert was selected to serve as an executive member of CDM, but it was her work throughout her senior year that set her apart.

“In my senior year, I served as RileyD, which stands for Riley Development. My job in this position was to have a one-on-one relationship with Riley families and kids and to have them come speak at different events throughout the year,” Calvert said. “This is important because it helps to show the importance fundraising holds and shows how impactful Riley Children’s Hospital is.”

The position allowed Calvert to foster personal connections and friendships with patients at Riley and create new philanthropy and leadership opportunities.

Calvert’s dedication earned her the honor of Next Generation Philanthropist, which includes a letter of recommendation sent to a collegiate Dance Marathon of her choice. Calvert plans to continue her philanthropy work through the Indiana University Dance Marathon.

“Through my work with CDM and The Caroline Symmes Endowment, I have vowed to make a difference and fight for funding for pediatric cancer, so eventually no kids have to fight for their lives and no parents have to lose a child,” Calvert said.