You are at:Home»Current in Carmel»Carmel Community»Carmel historian answers 120-year mystery in book

Carmel Clay Historical Society historian A.J. Wright didn’t plan to write a book about Constable Frank Carey, the only Carmel police officer to die in the line of duty, and his killer, Thomas “Cyclone” Johnson.

Wright originally planned to work on a story on Carey’s mother, Rose. 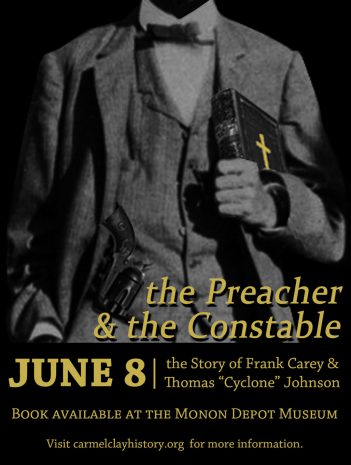 A.J. Wright’s book, “The Preacher & The Constable,” was set to be released June 8. (Submitted photo)

“I just didn’t think there was anything new that would turn up,” he said.

The Carmel resident was wrong and wrote “The Preacher & The Constable,” which was set to be released June 8 on the 120th anniversary of the shootings.

“Once I was researching, I saw there was enough here that people hadn’t seen before that we can do a deep dive,” Wright said.

Johnson was a traveling evangelist who arrived in Carmel in December 1899. During the next six months, he caused a stir with his provocative and derisive sermons. Some of the men in town tried to run him out by disturbing his services. The preacher was arrested after he violently retaliated against his hecklers. His trial was held June 8, 1900, at the Jeffries Livery Stable, where a shootout resulted in the deaths of Carey and Johnson. After an investigation by Delaware Township Justice of the Peace Joseph M. Stipp, the official verdict was that Johnson had killed Carey, but that Johnson came to his death by some unknown hand.

However, Wright said the name of who killed Johnson is in the long-forgotten documents of witness testimonies. Every witness who said they saw the shooting named the same person. Those wishing to know that name must read the book.

“I don’t want to be coy, but this has been a 120-year mystery and there are Hamilton County history enthusiasts I don’t want to spoil it for,” Wright said. “This shocked the town. This was a quiet Quaker village and nothing like this had happened before. They wanted to put it behind them as soon as possible. They didn’t want to identify the shooter. When newspapers were asking questions, they denied knowing the answer. A lot of them were reticent to identify the shooter to the official investigator, but we found the inquest. It was 78 pages, mostly witness testimonies.”

The book presents the contrast between Johnson and Carey, both age 32 when they died.

“Their lives were very different, and for them to end up dying one on top of the other makes the juxtaposition of these two very interesting,” Wright said. “Carey was a golden child of one of Carmel’s most prominent pioneer families. He was fortunate enough to go to college in a time when most people’s education ended in middle school. He’s a member of Earlham’s first football team. He ranks high in his class. He’s president of the Literacy Society. He meets his wife on campus. While he’s starting his freshman year at Earlham, Johnson is starting a two-year sentence for horse theft.”

Wright said when Carey finished college, his father gave him 80 acres to settle. Meanwhile, Johnson had no prospects.

Carey, a devout Quaker, was a direct descendant of George Fox, the founder of Quakerism, while Johnson was a street preacher who used religion to manipulate people, Wright said.

The book is available at CCHS Monon Depot Museum. For more, visit carmelclayhistory.org.