You are at:Home»Current in Zionsville»Zionsville Cover Stories»Night on the Bricks: Zionsville launches outdoor dining event

The Zionsville Chamber of Commerce, in partnership with the Town of Zionsville, has launched Night on the Bricks Thursday. The event will continue for nine weeks through July 30 and be held each Thursday from 5 to 9 p.m.

Sponsored by Century 21 Scheetz agent Laura Heigl, residents can shop at retailers lining Main Street, which will be closed from Pine Street to Cedar Street to through traffic. Cross streets east and west will remain open to traffic.

Tables will be pre-set on Main Street each Thursday, but attendees must bring their own chairs. Seating is limited to 100 until Indiana moves to Stage 4 in the state’s five stage plan for reopening its economy, which is expected to be June 14.

Tables are available on a first-come, first-served basis. Residents are encouraged to bring their own hand sanitizer and cleaning wipes and to use public restrooms instead of restaurant restrooms. Social-distancing measures will be followed during the event.

“The idea of this event is to provide a bright spot during a challenging time for local restaurants,” Mayor Emily Styron stated. “This is a chance for the community to come together socially, let our restaurants spill onto the brick street and support our local restaurants and retailers.”

Zionsville Chamber of Commerce Executive Director Allyson Gutwein said the chamber, inspired by a similar idea in Italy, polled its members nearly a month ago to see if they would be in favor of an outdoor dining event to attract residents to Main Street. A majority of chamber businesses supported it, as did Styron and other town officials who had independently proposed an outdoor event.

Gutwein said business owners have told her they want to participate not only to help their own businesses but to help other businesses as well.

A small business study conducted in April by the nonprofit Main Street America projected that up to 7.5 million of the nation’s 30 million small businesses could be at risk of closing within six months after the start of the COVID-19 pandemic.

“They want to make sure that their neighbors stay in business,” Gutwein said. “This is an event about neighbors keeping neighbors in business. We think that’s the heart of our community, anyway, and that’s certainly the heart of this event. People want to see other people succeed, too, because they know this is a retail ecosystem, and everyone helps one another and it strengthens the entire group.”

Other cities and towns have adopted similar approaches, creating outdoor seating areas in their communities, including Indianapolis, which blocked off a portion of Massachusetts Avenue for outdoor dining.

The summer months present an ideal time for such events, Gutwein said, because they allow businesses to begin to recoup some of the lost revenue from the pandemic while securing more stable revenues for what are typically many businesses’ most prosperous months.

“If you know you’re only going to bring in, let’s say, $1,000 a day (in the winter) versus the summer months where you know you can bring in $4,000 a day, the summer months might actually be much harder because that’s the time you create that padding to help with other months,” Gutwein said. “This is the time of the year that we really need to get out and support people, so that they can make it through another potential dry spell.”

Gutwein said that should the event succeeds,  the town will consider holding an outdoor dining series during future summers. 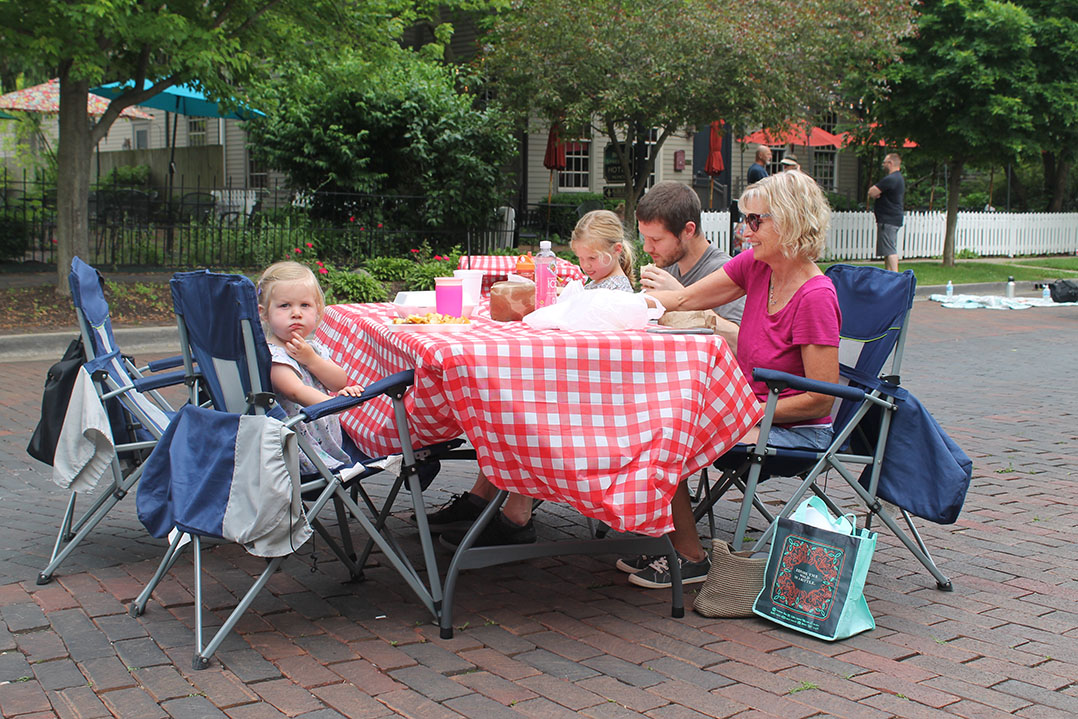 Tessa, left, Olivia, Tyler and Kathy Rieke eat during A Night on the Bricks. (Photo by Jarred Meeks)

“Even though in the state of Indiana we’ve seen devastating job losses, (based on) the numbers that we’re seeing, Boone County seems to have, perhaps in the short term, faired a little bit better than some of the (other counties) we’ve seen around the state,” Whitehead said.

Due to the COVID-19 pandemic, more than 40 million Americans have filed initial unemployment claims in the last 10 weeks, according to the United States Dept. of Labor.

Boone County’s unemployment rate for April was 9.1 percent, according to Whitehead, marking a sharp increase in the number of initial unemployment claims compared to previous years. Whitehead said the county has hovered around 2 to 3 percent in the last five years during the same calendar month. The state’s unemployment rate for April was 17.1 percent. Whitehead said the county’s lesser number was possibly a “silver lining” for Boone County residents who might soon rejoin the workforce.

“It appears that Boone County has one of the lowest unemployment rates in the state of Indiana,” Whitehead said. “What we are starting to see, some employers that did do layoffs, some of them are starting to call people back little by little.”