With no entertainment at CarmelFest this year, Sugar Creek Winery owner David Phillips wants to draw music lovers with a full weekend of singer/songwriters.

“Typically, we don’t compete so well with all the stuff going around the Fourth (of July), but since that has been all canceled, I’m hoping we can draw some people in,” Phillips said. 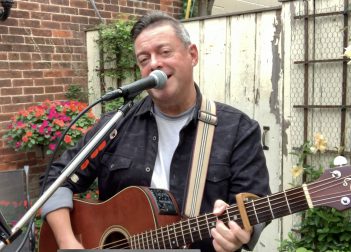 So that people can watch the fireworks on July 4, Brian Koning will perform from 6 to 9 p.m. John Gilmore’s performance is set for 4 to 7 p.m. July 5.

“We set the singers up in the doorway, so if it’s nice weather, they’re on the patio,” Phillips said. “If it’s not nice, they are inside but facing the outside. Most people will congregate on the patio. We have some people that will sit inside, so they can hear the music either way.”

Phillips said all three singers have been at Sugar Creek in the past.

“Brian plays a lot of venues around Carmel and Indy,” he said. “We’re offering a 50 percent discount on all wines and tastings for the entire weekend to see if we can get some folks in there. If we can get them in, we generally leave a good impression.”

Eighteen wines are on the menu. For more, visit sugarcreekwinery.com.

In other concert news, the Cool Creek Summer Concert Series was canceled because of the pandemic. Christopher Gullion, the Hamilton County Parks Department’s event coordinator, has arranged for two bands that had been scheduled to play in the summer series to perform free makeup concerts as part of the Concerts in the Centerpiece Extended Series at Coxhall Gardens in Carmel. The special series is slated for Sundays, from Sept. 6 to Oct.11. The two makeup concerts are The Flying Toasters Oct. 4 and The Doo! Band Oct. 11. Performance times are 5 to 7 p.m.