Diana Schwartz has been a cake decorator at the Dairy Queen on Ind. 32 in Westfield since the store opened more than five years ago, and like many businesses, ownership worried the COVID-19 pandemic would crush cake sales.

But that didn’t happen.

“We thought since COVID-19 happened that I wasn’t going to have anything to do because sales will go down,” said Schwartz, a Sheridan resident. “Since (customers) couldn’t come in the store, they wouldn’t be able to see the cakes, (and I thought) so sales will go down. 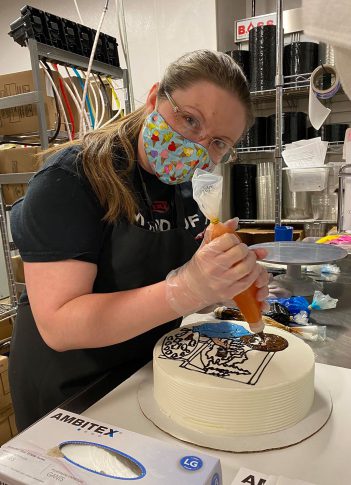 In fact, the opposite happened.

Dairy Queen’s cake sales more than doubled. Schwartz said typically during the spring and summer, she averages about 100 cakes a week, but now she sells more than 200 cakes a week. She also had to bring on three extra sets of hands.

“I usually am the only cake decorator, so I take care of special orders and the ones out in the freezer,” she said. “But it’s so overwhelming that now have three other girls helping me stocking the freezer, and I only have time for special orders at this point.”

“We see a lot of birthday cakes, but we are seeing people order cakes for their dog’s birthday. I had someone order a cake who wanted one because their appendix was taken out,” Schwartz said.

Other cakes celebrated the end of e-Learning and graduation. One was a custom cakes with the likeness of Aerosmith singer Steven Tyler with a golden retriever. Schwartz also made one representing Glacier National Park, with a beer mug holding a golf club when a woman said her husband needed a birthday cake and he liked beer and golf.

“Quirky stuff like that, just anything to make their day better and make their birthday or anything they’re celebrating more fun,” Schwartz said.

Schwartz worked at the Dairy Queen on Range Line Road in Carmel when she was in high school and college. She made dilly bars in the back and watched decorators make cakes. 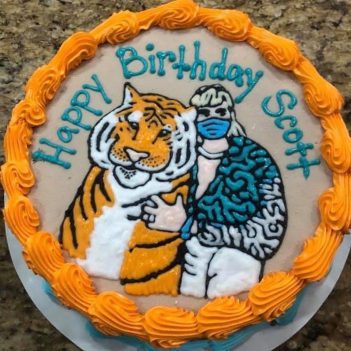 “I asked them if I could help,” she said.

Schwartz has a journalism degree from Butler University. She mad ads Yellow Pages after she graduated, but when she got married (her husband is Anthony) and became pregnant with her son, Andrew, she decided to stay home and focus on her family.

“I had to quit working because my son had a rare genetic disorder and was down at Riley Hospital for the majority of his life, and he ended up dying two months before his third birthday,” Schwartz said.

Schwartz worked for an eye doctor for a few years but stopped when she had her second child, Caleb. When she was six months pregnant with her third child, Jenna, she had lunch at the Dairy Queen in Carmel where she used to work.

“My old manager was there and came out and said they were building a Dairy Queen closer to where I live, and they were looking for a manager and asked, ‘Would you be interested?’” Schwartz said. “I said since I’m pregnant, I don’t think I can do the manager thing, but do they need a cake lady? And he said, ‘Yeah, I think they do,’ so I ended up with that gig and loved it ever since.”

Schwartz listens to music with headphones and sings while she decorates cakes.

“I have lots of fun decorating cakes. I did it as a hobby, and I took a class at Michael’s in a decorating course for fun, but I don’t technically have any other formal training in it,” she said.

Prior to the COVID-19 pandemic, Diana Schwartz didn’t regard her cake decorating job at Dairy Queen as particularly an important and lamented not applying her college degree in the workforce.

“About a month before, I decided, ‘OK, God, I don’t know why you’ve got me where I am. I’m just going to suck it up and stop worrying and focus on being where you want me to be,’” she said. “I got off work one evening about a week into lockdown, and one of my co-workers texted me. I wasn’t part of the Westfield Moms Facebook page, so I hadn’t seen any of it, but I joined the group and they made me cry reading all of the amazing things they were saying (about my cakes).

“I get it now. It’s just awesome and humbling that something I didn’t think was that significant, so many people seem to be enjoying so much. So, I’m honored I get to be a part of what’s helping right now.”