You are at:Home»Current in Westfield»Westfield Community»Skinner ready for Lions Club role as president

When Anna Skinner bangs the gavel for the first time as the Westfield Lions Club president July 2, she will complete a series of firsts.

Skinner, 26, is the first female, the youngest member and the first from Westfield High School’s Leo Club, the Lions Club affiliate for youth, to become president. 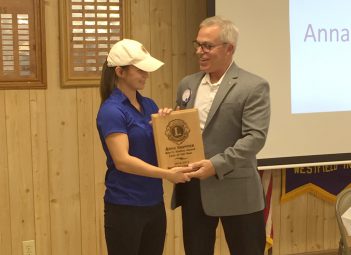 “She serves our community both personally and professionally,” Wardlow said. “She’s an active member and serves in all our events, from picking up trash to our fundraisers. Anna brings an infectious energy and enthusiasm to the club. It’s been a tough year with COVID-19, virtual meetings and canceled fundraising events.

“Her energy and passion will help carry us forward into a new chapter for the club as we celebrate our club’s 90th anniversary (in October) and recover from a rough year.”

Skinner is the managing editor of Current in Westfield and Current publications in Noblesville, Fishers and Geist. The 2013 WHS graduate joined the Leo Club when it started her sophomore year and became the LEO Club’s first president.

“It was a new option for me to get leadership experience and get involved in the community as a high school student,” she said.

“I like that it’s big on sight and hearing conservation, diabetes (and) cancer, and we help a lot of people in the community through fundraisers and events,” the Fishers resident said. “I like the group of people. They are very loyal to the community, and they like to give back.”

Skinner became first woman and youngest member to receive the club’s Lion of the Year award for the 2016-17 year. The award is based on service, contributions and effort.

The club is conducting Zoom meetings for its biweekly meetings. Skinner said the club will begin to discuss when to meet in-person under her leadership. Another mission will be making up for canceled fundraising events.

“We are trying to be proactive and unique with our fundraising ideas, and it’s just been tough,” she said.

Skinner said another focus will be determining the future of the clubhouse, which is next to the Grand Junction construction in downtown Westfield.