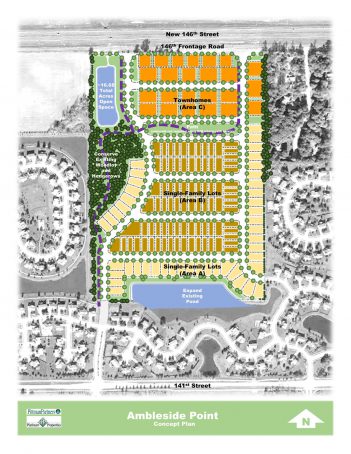 A neighborhood with up to 265 dwellings on 56 acres has been proposed in northwest Carmel.

Ambleside Point, on the south side of 146th Street east of Towne Road, is planned to include two- and three-story townhomes along 146th Street with single-family houses to the south. The homes on the perimeter of the neighborhood are expected to be priced in the $400,000s, with homes on internal lots — described in a planning document as similar to those in the Village of WestClay — priced in the mid $300,000s. Townhome prices are expected to start in the high $200,000s.

The petitioner is seeking to rezone the land from S-1 Residential to a Planned Unit Development, which allows for various housing types in one project. The site is designated in the city’s comprehensive plan as very low intensity residential, but developer Steve Pittman of Carmel-based Pittman Partners said the proposed neighborhood makes sense because of the development around it.

“We look at this as a mixed-use residential for-sale community,” Pittman said. “We think that it shows a really good transition from lower density to the south to higher density as we get closer to 146th Street.”

Pittman said he initially thought the site would be a prime spot for commercial development, as the City of Westfield has zoned land immediately north for that use and 146th Street has become a major Hamilton County thoroughfare. But City of Carmel planners were emphatic that the site contain only for-sale residential structures, Pittman said.

Ambleside is proposed to maintain an existing woodlot on the west side of the property. It is planned to have an internal common area, walking paths and a minimum of 25 percent open space.

Pittman said the land has belonged to the Hoffman family since the 1800s.

“They’ve owned the property for an extremely long period of time,” he said. “There are probably not a lot of properties around here that have been owned that long by one family.”

If approved, Pittman said he hopes construction on Ambleside will begin by May 2021 and last for approximately three years.