You are at:Home»Current in Carmel»Carmel Community»Endurance Run event to look a bit different during pandemic

The sixth annual 8-Hour Dream Endurance Race is unique in many respects. Take the start of the July 18 race at Butler University, for instance. 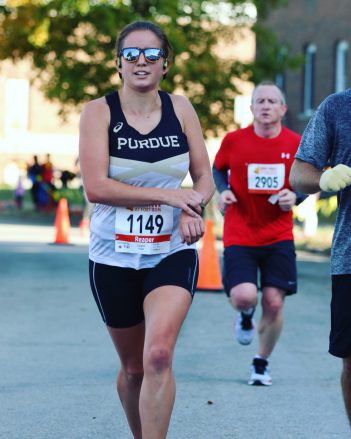 “There are opening ceremonies with a kickoff and a start, but you don’t have to start when the gun goes off,” race director Todd Oliver said. “Nobody will be running eight hours consistently. People stop and take 30-minute breaks. People change clothes and people eat. People have left the course and come back and restarted. We have people that are planning to start an hour or two hours late because they know they are not going to go for an eight-hour period, but there is a certain distance they want to achieve. Some do it just to complete a marathon distance. For instance, the Carmel Marathon has a 6 1/2-hour time limit. This race technically would have an 8-hour time limit.

“If you have completed 23 miles and you are down to 3 miles with an hour-and-a-half left, we have people that will grab an adult beverage and walk the last miles and enjoy it.”

Carmel Road Racing Co., which presents Carmel Marathon, also manages the endurance race. Oliver said the race is using the Centers for Disease Control and Prevention guidelines for social distance during the coronavirus pandemic. The tents in Tent Village will be 6 feet apart. Volunteers will wear masks and gloves during check-in and awards ceremonies. The post-race party, which includes live music and a cookout, has been canceled, per Butler mandate.

The race includes a long course (5K or 3.1 miles) and short course (1.9 miles). Oliver said a lot of strategy is involved.

“If we are running solo against each other, and I see you take a long course, I might take a short course because I might be able to run two shorts to your one long one and gain mileage on you,” Oliver said. “At the end of the eight hours, the person or team who accomplishes the most miles over that time (wins).”

Carmel resident Gabby Behr is a captain of a Carmel Runners Club team for the second consecutive year.

“I love the teamwork aspect of this race,” she said. “It’s great to spend the day with a group of friends, cheering each other on and seeing how well we can all do as a group. Relay races are a perfect opportunity to be competitive while still working together.”

Behr is on a six-person team competing for the Run Club Cup Club Championship.

“Last year, we decided to only run the shorter loop with the idea that we could all hit that at a faster pace than we could for the longer loop,” Behr said. “We will likely employ a similar strategy this year, especially if it’s as hot out as 2019.”

The solo event is sold out with 185 runners. Team registrations (five to six runners) are still available.