The Coalition of Stakeholders and Teachers in Westfield Washington Schools, or COSTS in WWS, has a short- and long-term plan.

The first is to focus on Election Day in November, when the WWS Board of Trustees District 1 and 3 positions are up for election.

The long-term plan is a bit broader.

“Long term, we want to just keep the community informed, and we want to make sure the school board and the superintendent always continue to have our best interest at heart,” said Carrie Larrison, one of the coalition’s leaders.

The coalition was formed following the reassignment of Westfield High School Principal Stacy McGuire in June. Her new title is administrator of alternative learning. The reassignment was approved as part of a personnel packet at a June 9 school board meeting by a 3-2 vote, with members Duane Lutz, Amy Pictor and Amber Willis voting in favor of the change and members Rebecca Ogle and Bill Anderson voting against. Lutz is the school board representative for District 3 and Pictor is the school board representative for District 1. Following the vote, two rallies were held to request McGuire be reinstated as WHS principal. However, two interim co-principals, Bill Naas and Alicia Denniston, have been appointed. Naas and Denniston previously served as assistant principals at the high school.

“We want to make sure money is being spent responsibly, referendum money and money from the state and that the schools are getting what they need and central office isn’t too top heavy,” Larrison said of the coalition’s goals. “We just want to be proactive for our elections in November and elect good school board members who have the total community’s best interest at heart as well as the best interest of the students and teachers and who are fiscally responsible.”

COSTS in WWS is asking for community members to attend the July 14 school board meeting. It begins at 7 p.m. at Washington Woods Elementary School, 17950 Grassy Branch Rd.

“We would love for community members to come out in support of Stacy McGuire, of course, but also we just want the school year to get off to a good start,” Larrison said. “There’s a lot of chaos already surrounding the start of school with COVID-19 and construction going on.”

The school board issued the following statement about the reassignment and subsequent rallies:

“Westfield Washington Schools recently announced a leadership transition in which Dr. Stacy McGuire was appointed Administrator of Alternative Learning for the district.

“A majority of the WWS Board of School Trustees supported this recommendation. While we may not always share a unanimous point of view, we are united in our responsibility to serve the district and in wanting the best for our students, teachers and the community. We agree as a full Board we must work together to strengthen and heal our community.

“We appreciate the feedback we have received. Board matters require a level of confidentiality that state law, policy and ethical standards mandate we follow. We understand that can be frustrating and ask that our community understand that we are not able to share details.”

Larrison said the coalition hopes that if McGuire isn’t reinstated that the interim principals stay in place to provide consistency for students and staff.

“We want them to make sure they take their time in selecting a new principal who will truly do a good job and not rush into hiring somebody if there’s not a good candidate out there,” Larrison said.

For more about COSTS in WWS, email costsinwws@gmail.com. 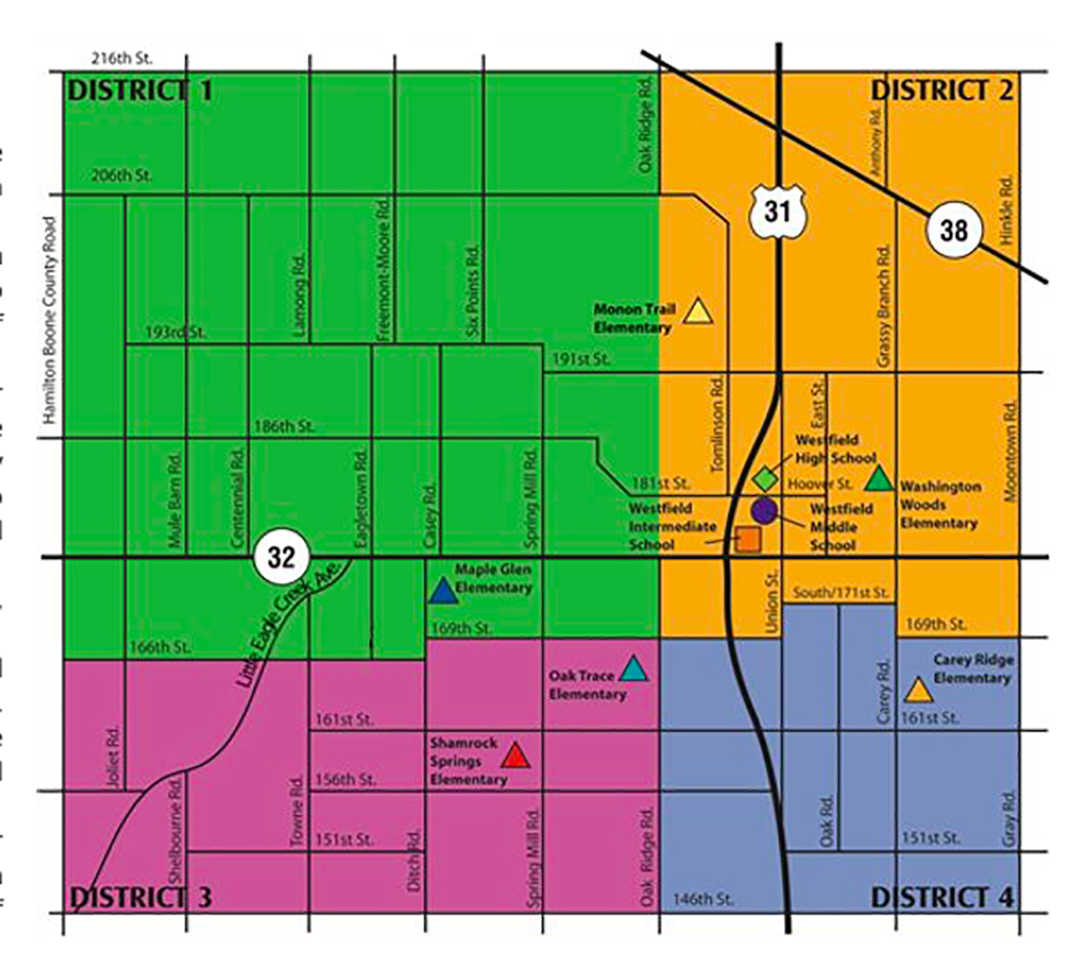 A map of the school board districts. (Submitted image)

Since Stacy McGuire was reassigned to administrator of alternative learning, two rallies have been held to request her reinstatement as high school principal. So far, the rallies haven’t accomplished that result but they have drawn large turnouts. Coalition of Stakeholders and Teachers in Westfield Washington Schools leader Carrie Larrison said more rallies may be held in the future.

“It really just depends,” she said. “The rallies were great, and we got a lot of people out listening to the issues and coming forward. The main thing we want is for the school board and (WWS Supt. Sherry) Grate to know everybody is still interested, so if we need to have another rally, we will absolutely still have one.”

Larrison said she and others did state their concerns to the school board and encouraged discussion, but none of the members responded.

COSTS in WWS also is working to create an anonymous survey to gauge teachers’ opinions of the district’s work environment and learn their chief complaints.