You are at:Home»Current in Carmel»Carmel Community»New bicycle route crossing Indiana to pass through Carmel

Carmel will soon have a new designated bicycle route. 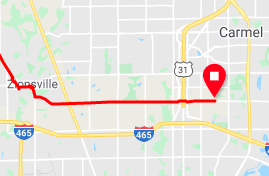 “It goes from Zionsville to 106th Street and then takes 106th Street over to the Monon, where it will connect into Bike Route 35,” said David Littlejohn, alternative transportation coordinator for the City of Carmel. “(The route) promotes bike touring. It shows people safe, recommended routes through the community or from one community to another for a longer ride.”

Littlejohn said it’s a positive thing to get more cyclists in Carmel.

“There are multi-use paths probably over 90 percent of the route,” Littlejohn said. “There is only a mile on 106th Street where there is not a multi-use path for people to take. A multi-use path in Carmel is a 10-foot asphalt path adjacent to the roadway. There are definitely safe bicycle paths during our stretch of the route.”

American Association of State Highway and Transportation officials designated a corridor crossing Indiana to be developed as United States Bicycle Route 37. The Adventure Cycling Association and Bike Indiana, with the cooperation of the Indiana Dept. of Transportation, proposed a specific route to be designated as USBR 37.

Littlejohn said the goal is for some cyclists to take the routes throughout the state. North/south bicycle routes have odd numbers.

“The goal for Route 35 is to go from Michigan to Florida,” he said. “The Indiana portion was completed a few years ago. That’s what this was intended to do, to show people how they can tour from one state to another, through their state and across the country.”