You are at:Home»Current in Carmel»Carmel Community»Carmel students weigh virtual class offerings, health risks in deciding whether to take in-person classes

Most years, class schedules, school supplies and wardrobe decisions are top of mind for many students as they prepare to head back to school.

But during the COVID-19 pandemic, they are facing decisions with much higher stakes, such as whether taking in-person classes is worth the possibility of contracting COVID-19 or unknowingly spreading it to a vulnerable family member.

That choice has become even more difficult for some Carmel High School students who are concerned about missing out on educational opportunities that might not be offered virtually. They are weighing the importance of their education against risks to their health and the health of those around them.

Carmel Clay Schools officials announced July 14 that CHS students will have the option of taking courses virtually or attending a hybrid of in-person and virtual classes. Many students became concerned that they would not be able to take advanced classes virtually because they were not listed on the website to be used for virtual learning, but CCS officials said July 20 that’s not necessarily the case.

“We recommend that you make your decision assuming your student will have access to all of the academic classes scheduled for the fall semester. We will not be able to determine how classes will be delivered until we have established numbers,” the district stated in a July 20 email to parents. “It will be our goal to offer as many of our in-person classes as possible for our virtual students.” 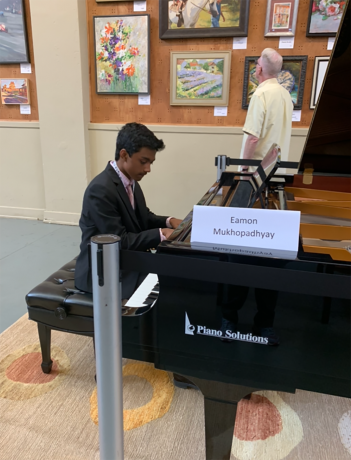 CHS student Eamon Mukhopadhyay performs a piece on the piano. He plays synthesizer in the CHS marching band and is still trying to decide whether it makes sense for him to return to in-person classes. (Submitted photo)

Although thankful for the clarifications, incoming CHS sophomore Eamon Mukhopadhyay still faces a difficult decision about whether or not to attend in-person classes. His younger brother, Aheer, suffers from severe asthma, which puts him at a higher risk for complications if he were to contract COVID-19.

“We want to prevent the risk (to my brother),” Eamon said. “I want to respect his health and do as little in-person classes as possible to minimize the risk of him getting the virus.”

Eamon said he’d prefer to take all of his classes online, but he realizes that might not be possible with performing arts. If participation in the program is only offered in-person, he’s leaning toward going back to the school building.

If Eamon chooses the hybrid option, his father, Snehasis, said his family will take steps to protect Aheer’s health, such as frequent hand-washing and making sure Eamon wears a face mask at school.

“We always have dinner as a family all together, but we’ll enforce that they are seated at a distance to each other,” said Snehasis, a computer science professor at IUPUI.

Aheer said he will only be doing virtual classes as he begins his eighth-grade year at Carmel Middle School.

“I’m pretty much forced to stay home if I don’t want to get really sick,” he said.

If Eamon goes back to school, Aheer said he doesn’t think it will be too difficult to adjust to practicing physical distancing from his brother in the home.

“As long as we can still talk to each other, then we’re fine,” he said.

Incoming sophomore Raghav Sriram faces a similar conundrum. He believes that virtual school should be the only option, and he’s disappointed that he may not be able to take some of the AP classes he originally scheduled if he doesn’t attend in-person.

“Carmel High School is a COVID hot spot waiting to happen, and if the (district) decides to move forward with its hybrid plan, I predict many students will be infected,” Sriram said. “It’s hard to enforce social distancing measures within a school of this size. If one person gets infected and goes to school, they will spread the disease to numerous other students and potentially cause an outbreak.”

Sriram has suffered from asthma in the past, which makes the choice even more difficult.

“For me, the most difficult decision to make is determining whether it’s worth going to in-person school or not,” Sriram said. “ If I go to school, I have the chance of getting COVID-19 and possibly getting permanent lung damage, but if I choose the virtual option, I may not be able to take some of the courses I initially scheduled. I just wish there was a happy medium.”

CCS plans to release more details regarding its plans for the 2020-21 school year in the coming weeks. School is scheduled to start Aug. 11.