You are at:Home»Current in Geist»Geist Community»Austin living childhood dream of 500 Festival Princess

Alexa Austin has been waiting a long time for this opportunity.

“As a youngster attending the Indianapolis 500 Festival Parade annually, I would wait excitedly for my favorite float, the 500 Festival Princess float,” Austin said. “I looked up to the women representing their schools and hometowns, and I am honored to fulfill that childhood dream.” 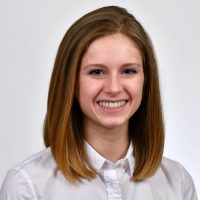 Austin, a Geist-area resident and 2016 Lawrence Central High School graduate, was named 500 Festival Princess earlier this year. The Indy 500 was postponed from May 24 to Aug. 23 due to the COVID-19 pandemic.  It was announced July 22 that the parade set for Aug. 22 and the other in-person events, such as Salesforce & JPMorgan Chase 500 Festival Kids’ Day and Rookie Run set for Aug. 8, have been canceled. A spokesperson said the 500 Festival will continue its focus on creating new ways for the community to celebrate the Indianapolis 500 virtually

At this point, the Indy 500’s attendance will be limited to just 25 percent capacity.

“I am most eager to see the new opportunities for the festival, Indy Car drivers and team owners to interact with fans in our new virtual style,” Austin said. “I was on a 10-year race streak until last year when I spent Memorial Day finishing my semester abroad in Sydney, Australia. I know that it is still possible to feel the spirit and tradition of the festival without physically being in Indy, and I am excited for other Hoosiers to get to experience that. While it won’t be a typical schedule, the heart of the 500 Festival – honoring veterans, showcasing our great city and welcoming race fans – will still be celebrated. I expect we will all feel the month of May, no matter the eventual month or surrounding logistics.”

“As an Indy native and lifelong fan of the festivities, I am eager to experience them in a new light. I know the 500 Festival is working tirelessly to deliver to the community of such loyal supporters.”

Austin said her most memorable outreach was conducted virtually about a month into quarantine.

“A few other Princesses and I were able to join the Easterseals Crossroads All-Staff Month of May zoom meeting along with former driver and current team owner Sam Schmidt to discuss what May means to us and how that was impacted by the global situation,” Austin said. “While that in itself was an incredible opportunity, the best part was finding out in the middle of the Zoom meeting via a Facebook announcement that Kathleen Soller, who agreed to my last-minute request and graciously volunteered her time to join the call, was the 2020 500 Festival Queen Scholar. Getting to be a part of her initial celebration and sharing that with the Easterseals Crossroads staff truly embodied how ‘This is Indy, This is May’ brings our community together.”

Austin graduated from Indiana University in May with a bachelor’s degree in business from the Kelley School, majoring in finance and marketing. In the fall, she is moving to Chicago to join Bain & Co. as an associate consultant.

“In the interim, I took advantage of a nontraditional summer by moving to Hilton Head Island and working in guest services at The Inn & Club at Harbourtown,” she said. “Nothing like preparing for a Chicago winter by spending the summer at the beach.”

“I spent most of my time outside of school training at Dance Magic Performing Arts Center rehearsing for original ballets and regional/national competitions,” she said.