Earlier this morning, Joseph E. Kernan, the 48th Governor of Indiana, died following a long illness. He is survived by his wife, Maggie, and seven siblings, who live in the state of Maine and the Washington, D.C., area. 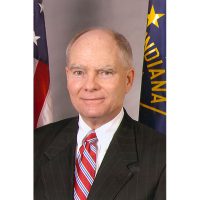 Kernan’s career began as a United States Navy Lieutenant. He and his co-pilot were shot down while on a reconnaissance mission over North Vietnam in 1972. He spent 11 months as a prisoner of war in Hanoi, including at the infamous ‘Hanoi Hilton’ prison.

A graduate of the University of Notre Dame in South Bend, Ind., Kernan returned home in 1974 to begin a career in business. In 1980, South Bend Mayor Roger Parent asked him to serve as the city controller.

Seven years later, in 1987, he was elected to his first of three consecutive terms as mayor of South Bend. In his third election as mayor, he received over 82 percent of the votes, which is still the widest margin of victory in South Bend gubernatorial history, according to a press release.

In 1996, Frank O’Bannon, who was running for Governor of Indiana, asked Kernan to join him as the candidate for Lt. Governor. O’Bannon and Kernan were elected in November of that year. The two won reelection four years later in 2000.

When Governor O’Bannon died unexpectedly of a stroke in 2003, Kernan was sworn in as the state’s 48th Governor. Kernan made history immediately by appointing Kathy Davis as Indiana’s first female Lt. Governor.

Kernan continued to work as an Adjunct Professor at the University of Notre Dame, and through his own consulting firm until his death earlier today.

“Indiana mourns the loss of Joe Kernan, a bone fide American hero, decorated Navy officer, and truly selfless statesman who always placed the interests of his fellow Hoosiers first,” Indiana Gov. Eric Holcomb stated. “Distinguished isn’t a strong enough word to describe him. Without regard for personal cost, Joe Kernan devoted every ounce of his life, time and again, to upholding the oath he took, and serving the country and state he loved.

“Through his decades of servant leadership and sacrifice, Joe Kernan modeled all the best of what it means to be a Hoosier and his legacy will continue to live on in each of us whom he inspired.”

Arrangements are being made by Welsheimer’s Funeral Home in South Bend. Kernan had expressed a preference for Welsheimer’s because the funeral home sponsored his little league team in 1958 when he was 12 years old.

“Joe Kernan’s many and noteworthy contributions to Notre Dame, our community, the state and our nation cannot be overstated,” stated John I. Jenkins, C.S.C, President of the University of Notre Dame. “A student-athlete at the University, he earned a bachelor’s degree in government, then entered the Navy and served as a decorated aviator in Vietnam, where he demonstrated uncommon heroism when shot down and held prisoner of war for 11 months.”