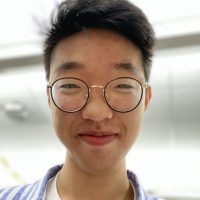 Little did he know the best was yet to come.

The Carmel High School senior co-directed and co-wrote the film “Whipped Cream Cake” with Minju Hong, who is from the Detroit area and is now a Northwestern University freshman.

After completion of the film in 2019, the duo sent it to several film festivals. It was accepted into Indy Shorts as an Indiana Spotlight winner in the High School Film Competition.

“Then we were lucky enough to win the grand prize, too,” Mo said. “When it came out we were the winners, I was very surprised. In my mind, the reason we won the Indiana Spotlight is I was an Indiana resident and it fit the criteria.”

However, Mo knows the competition was much stiffer when the film won the Summer White Lynch Memorial Award Grand Prize of $2,000, which was announced July 25 near the conclusion of Indy Shorts.

Mo and Hong worked on the film as their final project during a 2019 summer film program at Northwestern.

“When we decided to make a film together, we decided to find common links between us,” Mo said. “She’s a Korean American and I’m a Chinese American, so we had our background. Being Asian American is a central part of your identity.”

Mo said they had similar priorities as far as family life and school. The story was filmed in two weeks.

The six-minute film is about a Korean American girl, played by international student Yinuo Jiang.

“It depicts her family life, her school life and her trying to make the decision which one to prioritize, whether to hang out with friends, whether to work on school or whether to celebrate her mother’s birthday,” Mo said. “In the end, it’s bittersweet. With working parents, it can be hard at times to spend time with your family. There are great expectations in achieving your potential, and we tried to present that in the film.”

The cast members came from the Northwestern film program.

Film is one of Mo’s many interests, along with journalism, finance and economics. He has written some articles for Current newspapers.

“I enjoy being able to capture moments of other people’s lives,” Mo said.