In her mind, Claire Adams envisioned a clear-cut finish to her competitive swimming career.

The 2016 Carmel High School graduate would conclude her University of Texas career at the NCAA Championships in Indianapolis and then take one more shot at making the Olympics. Adams graduated from Texas in December 2019 and then started a three-semester postgraduate student teaching certification program. 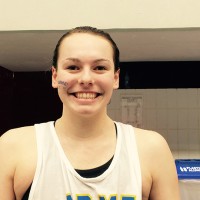 “My plan for the last four years was to swim through the Olympic Trials of 2020 and would likely be done after that because my student teaching program requires I’m in a classroom every single day after I get to the third semester,” she said. “So to balance swimming with essentially having a full-time job was going to be really difficult.”

Then, like everyone, Adams was thrown a curve when the coronavirus pandemic forced the cancellation of NCAA competitions, the postponement of the Summer Olympics to 2021 and the Olympic Trials for swimming delayed until June 2021. So Adams, 22, made the decision to retire from competitive swimming.

“I did consider at the beginning of everything this summer, could I make it work?”  said Adams, who won her third consecutive Big 12 Swimmer of the Year title earlier this year. “Could I have unconventional practice times and kind of be on my own? My coach was willing to cooperate with me and help me figure it out and make it the best program that I would need. I just decided at the end of the day I was ready to move forward and close that chapter of my life (and) focus on my student teaching and have a year to transition from being a student-athlete and being a young professional.”

Adams broke her hand a week before the 2016 Olympic Trials. She had been seeded fourth in the 100 backstroke, but ended up finishing 46th.

“When we found we weren’t going to be competing in March, that was difficult because it felt like it was taken out of my control a second time the way that it was in 2016,” Adams said. “To be able to go to the Olympics would have been an amazing experience, don’t get me wrong, but I do feel I learned a lot more about myself and who I am as an athlete, a teammate and a person after what happened in 2016. I’ve done some cool things in swimming and met some cool people. That is what I’m taking from the experience.

“The situation now is entirely unprecedented, so it feels a little selfish to me to be so worked up about the fact that I didn’t get to swim a swim meet when I have great health and I have people around supporting me and loving me during this. I can’t complain.”

Adams, who won a record 16 state titles in 16 attempts for CHS, captured 23 Big 12 titles. She won six titles at the Big 12 Championships in February in Morgantown, W. Va.

“In some ways, it was an imperfectly perfect ending for me,” she said. “I swam my best times. I truly believed I felt that the Big 12 was the most fun I had in a swim meet over my four years swimming at Texas.”