The death of George Floyd and subsequent protests had an effect on Fishers High School senior Zach Clar.

Around the time that Clar put out “Digital Candyland” as a single under his performing name BBOY ZERO, Floyd, an African American, died as Minneapolis police officer Derek Chauvin knelt on Floyd’s neck for nearly 8 minutes during an arrest. Chauvin, a white officer, has been charged with second-degree murder, among other charges. The incident sparked Black Lives Matter protests around the nation.

“I felt like I would regret self-promoting my music, especially as a white dude, during that time,” Clar said. “I owe everything to the Black community because they have created all of the art and music that I love.”

Clar’s debut album, “INDIGO,” was released July 17 on all streaming platforms, including Spotify and iTunes. All proceeds from album stream purchases of “INDIGO” and merchandise will go to the Bail Project Indianapolis chapter. The project is designed to reduce jail crowding of low level offenders in Marion County.

“I classify my music as alternative hip-hop, but It’s hard to put music in genres in today’s musical climate,” he said. “I would say the artists that inspire me the most are BROCKHAMPTON, Aminé, Monte Booker, JPEGMAFIA and Jon Bellion. I have so many more but those are the core five.”

Clar wrote, recorded and produced “INDIGO” by himself. Quinn Heiking, a 2018 FHS graduate, mixed and mastered the tracks. 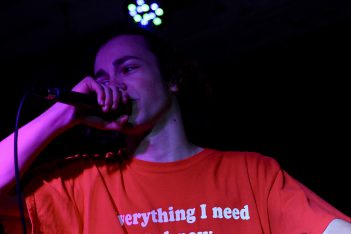 Zach Clar, who performs as BBOY ZERO, is donating his album proceeds to the Bail Project Indianapolis. (Submitted photo)

“The only collaboration on the album that was with a local artist was ‘Grow,’ featuring Carson Ulmer (a 2019 FHS graduate),” Clar said. “Some of the other features, like sk8terwang & FLETCHER!, are fellow members of an internet hip-hop collective I’m in called BRĒDLAND. We met each other through Instagram, and we make music by sending audio files into a shared Google drive.

“We have the singles available for stream on all platforms.”

Clar said he is waiting until after the pandemic to perform a live show at the 31Svn Street Dance Academy, where he is a part-time breakdancing instructor and performer.

“This city is filled with kids like me that are more interested in music than sports,” he said. “I think breaking is a great outlet for everyone, but especially the youth in Fishers.”