Collin Flannagan decided the time was right to write an easy-to-comprehend book about financial investment after fielding several questions from family and friends. 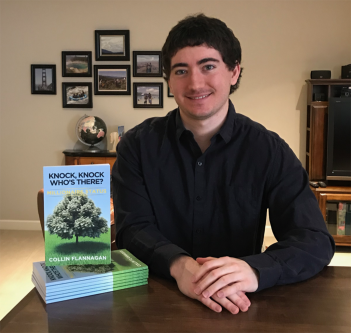 Flannagan, a 2012 Carmel High School graduate and Westfield resident, wrote “Knock, Knock Who’s There? Millionaire Status,” which he self-published and released on Amazon in mid-June.

“I felt there was nothing on the market that was quite like this,” he said. “No one I know wants to read a finance book, especially when they are young in their 20s. I wanted to add a bit of humor to it and make it shorter than most other books. People especially don’t want to pick up a 300-page finance book.”

Flannagan said his target market is ages 18 to 30 so they can learn the basics of investing and saving early.

Flannagan started writing the 84-page book full time in December 2019 after he left his position at Empower Retirement, the nation’s second-largest 401K provider, in Kansas City, Mo., to return to Indiana.

“I didn’t feel Empower was a great fit for me,” he said. “Previous to that role, I was working at an office firm that did the balancing for portfolios for investment managers, so I worked in the finance industry four years out of college.”

Flannagan graduated from Bellarmine University in Louisville, where he majored in finance and economics.

“The first section of the book, I dumb it down so someone from any educational background, even those in middle school, would pick up the concepts,” he said.

Flannagan’s premise is that a person earning $15 an hour could save $1 million for retirement, depending on where the person lives and provided the person saves and invests properly through the years.

“I’m keeping it simple, just the pertinent things,” Flannagan said. “Along with definitions, I tie it into real-world concepts. For example, I was writing it during the (stock) market crash of a few months ago when COVID was big in the news and the market had a 30 percent pullback. Yes, there may be a lot of volatility in the market, but if you are a young investor, in the long term, it’s better to stay in the market rather than arbitrarily sell.”

The third section is more detailed with examples of how the simple approach of buying and holding can be more beneficial than trading too much, as some younger people do.