You are at:Home»Current in Carmel»Carmel Community»Carmel’s Smoky Row Road reverts to original spelling

Growing up, Marysa Long was a bit confused by her address.

The street signs said she lived on Smokey Row Road, but the nearby school was called Smoky Row Elementary.

“People would ask me what my address was and ask how it’s spelled and I would say, ‘I don’t really know,’” said Long, 24, who has since moved to Hartford City.

The road’s name recently raised some eyebrows in Carmel when large letters spelling “Smoky Row” were added to its bridge crossing of Keystone Parkway. Many people — Long included — assumed it had been spelled wrong.

But according to Carmel Mayor Jim Brainard, the new sign is part of an effort to return to the road’s original spelling. The mayor aims to eventually update all street signs labeled Smokey Row Road to Smoky Row Road. The road is also known as 136th Street, and city leaders haven’t decided if those signs will change, too.

“It’s been done both ways in Carmel over the years,” Brainard said. “The proper spelling of the word smoky is without an E. That’s what the dictionary says.”

Carmel Clay Historical Society historian Andrew Wright said late historian Phil Hinshaw recorded that a sulfur spring on the northwest side of Carmel’s old town area created a thick fog that gave Smoky Row its name. Wright confirmed a sulphur spring was there, but he said the story of how the Smoky Row name came about could be a “just a tale.”

Wright described Smoky Row as a “small, forgotten settlement” just east of the town of Carmel. In references from 1875 to 1923 it is spelled Smoky Row, with the first reference to Smokey Row in 1924. Wright said between 1924 and 2008 there are 737 instances of Smokey Row in Hamilton County newspapers and 605 instances without the e.

But why the spelling changed remains a mystery.

“There was a neighborhood in Marion Township, Boone County, called Smokey Row with an ‘e,’” Wright said. “Many residents of that Smokey Row did business in Sheridan, and so that Smokey Row is in early editions of the Sheridan newspaper. I wouldn’t think it influenced the spelling of our Smokey Row.”

Brainard said the city is working to unify the road’s name now because redevelopment is soon coming to the area. Old Town Companies is building a mixed-use project with apartments, townhomes, condominiums, single-family homes and commercial space on 27 acres on the northeast corner of Smoky Row Road and U.S. 31.

Long said she is glad to be able to have confidence in the spelling of the street where her mother still lives.

“It’s good to know, so when I tell people where I lived or where my mother lives, I don’t sound like I don’t know,” she said. 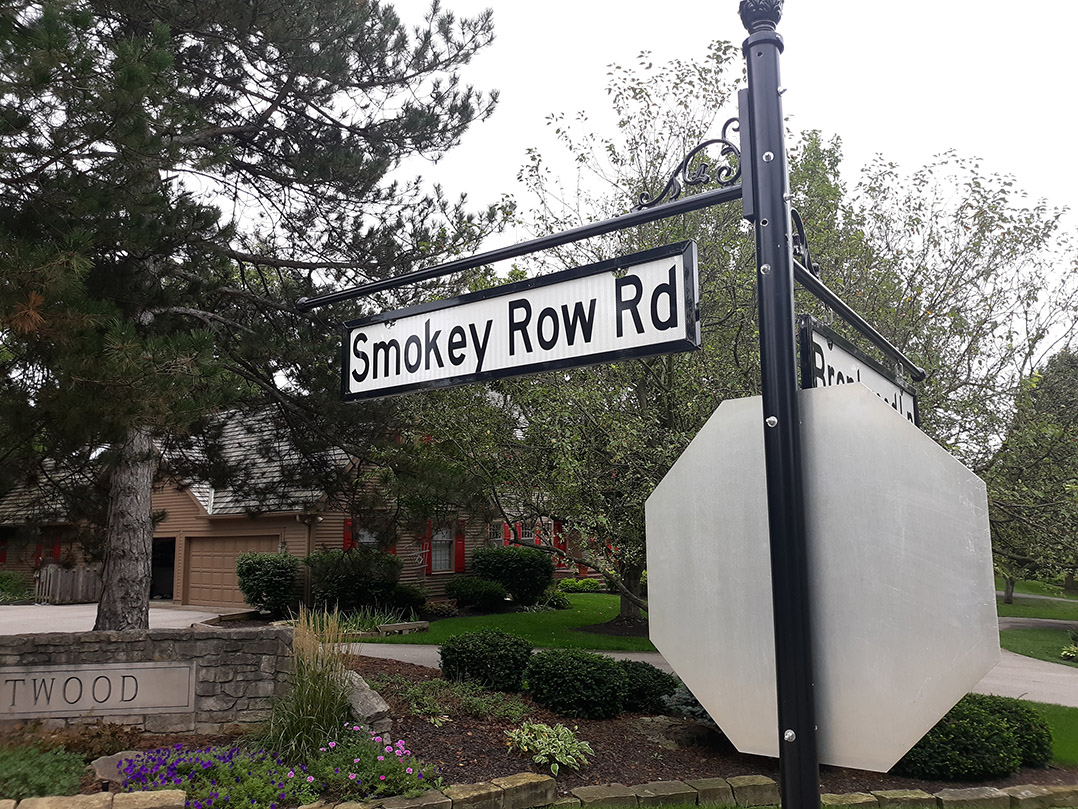 Smoky Row Road isn’t the only one in Carmel with a pending name change.

Mayor Jim Brainard said the streets in the Arts & Design District with numbered names are likely to change, too.

The city plans to begin using some of the original names for streets in the area used from the early 1800s until the 1920s, when the numbered names were adopted. That’s already happened for 4th St. SW and SE, which is now known as Elm Street, although that street was originally known as Willard Street. 6th Street — soon to be known as Walnut Street — was the original Elm Street, according to the Carmel Clay Historical Society.

The city hopes renaming the streets will also help eliminate confusion. With nearby street names such as 1st Ave. SE, 1st Ave. SW, 1st St. SE and 1st Ave. SW, visitors and packages will often arrive at the wrong location.

“It’s very confusing for mail delivery, for people driving in the area that aren’t familiar with it, and even people that live there,” Brainard said.

The following are the previous names of existing streets according to the Carmel Clay Historical Society. The City of Carmel is considering renaming many of the numbered streets in the Arts & Design District, with new names inspired by historical names of streets. A street’s previous name will not necessarily become its new name.