You are at:Home»Current in Fishers»Fishers Community»Fishers council delays vote on Maple Del project 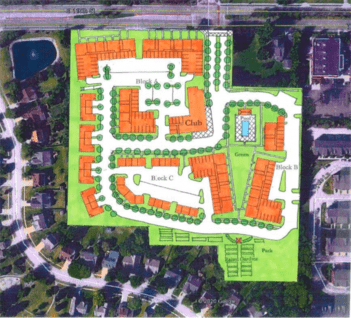 The Fishers City Council gave a lukewarm reception to Maple Del, a new development proposed west of the Chatham Tap restaurant on 116th Street. The council voted 7-2 to delay approval of the project another month.

“A few years ago, we extended the Nickel Plate code and zoning to this area currently zoned as Village Center. We have seen this as an area for future redevelopment,” said Megan Baumgartner, Economic Development Director for the City of Fishers. “These are larger lots, so when people were looking for what’s the next location for redevelopment in Fishers, this always came up in the conversations.”

There were 17 properties in the proposed development area. In 2019, some of those property owners spoke with development groups about selling their properties. At the time, 14 properties had closings scheduled.

“The city wasn’t ready to say what that development should look like, so then we had an opportunity to partner with the Hageman Group and do land acquisition,” Baumgartner said. “The remaining three properties were not interested in selling and not included in the land acquisition agreement.”

Demolition began in January. In April, an additional owner decided to sell.

If approved, the development also would include 352 parking spaces with covered garages, surface and on-street parking.

Development firm J.C. Hart requested approval from the council for a developer-backed bond in which the city would issue the debt and then receive 100 percent of the tax increment financing collected from the area.

“We are issuing debt, but everything contained within that development is their responsibility, so there’s no threat to us,” Baumgartner said.

Council member David George requested the council wait until October to vote to allow for future neighborhood meetings in the area prior to the vote.

“We need the money inside our city for our parks and our roads, and I have a problem with any fees being waived,” he said. “That’s what we bring in from developers to help keep our real estate taxes down.”

Council member Pete Peterson lauded the project. The council voted 7-2 to delay voting on the project until its October meeting. Peterson and councilor John Weingardt voted against the delay.