Eilise Lane’s love of craft beer brewed into a passion when she lived in Eugene, Ore.

“I had such a great time learning about the styles and getting involved in the scene,” said Lane, CEO and head brewer for Scarlet Lane Brewing in McCordsville. “One day I was out having a beer and asked if the brewer was around, and they said, ‘She’s not here.’ Hearing the ‘she’ kicked something in my brain, because every other brewer I met had been the standard brewer’s stereotype, it’s a guy with a beard.

“At the time, I was working a corporate job where my soul was just deflated. I was just not happy at all.”

After hearing about the female brewer, Lane purchased a craft beer home kit.

“I loved the science and the artistry to it,” Lane said. “It was just fantastic.”

Her hobby grew to the point that she filled her garage with brewing equipment to improve fermentation.

“My parents and my husband were at my house one day when I was brewing, and they said, ‘This is first time we’ve seen you smile,’” Lane said. “They said, ‘You haven’t been happy, and now you are really happy whenever you are doing this at home.’ I decided I was going to leave behind the security of what my corporate job was offering me and went back to school for fermentation sciences.”

Only one other woman was in her class of 50 at American Brewers Guild in Vermont.

Lane has Indiana roots, having been born in Greencastle. She graduated from North Putnam High School and Butler University.

“Since we had been out living near my parents for a while, we talked about coming back to live where my husband’s parents were from,” said Lane, who worked for two breweries in Oregon. “We decided to create a location where we could become everybody’s living room. That’s how Scarlet Lane was created – good beer and everyone hanging out in the living room.”

Lane launched Scarlet Lane in 2014 with an emphasis on stouts, Northwest IPAs and pale ales. Lane likes working honey into specialty beers, including the Helter Seltzer Honey. Besides McCordsville, there are three Indianapolis locations and one in Beech Grove.

Lane’s husband, Nick Servies, works in another field but helps Scarlet Lane with marketing and business matters. Scarlet was the name of the couple’s dog.

“Scarlet had a lot of health problems but she fought and fought, and she was just the happiest little girl,” said Lane, who lives in Broad Ripple. “She made the best of every situation. She passed away during the creation (of the business) in 2013.” 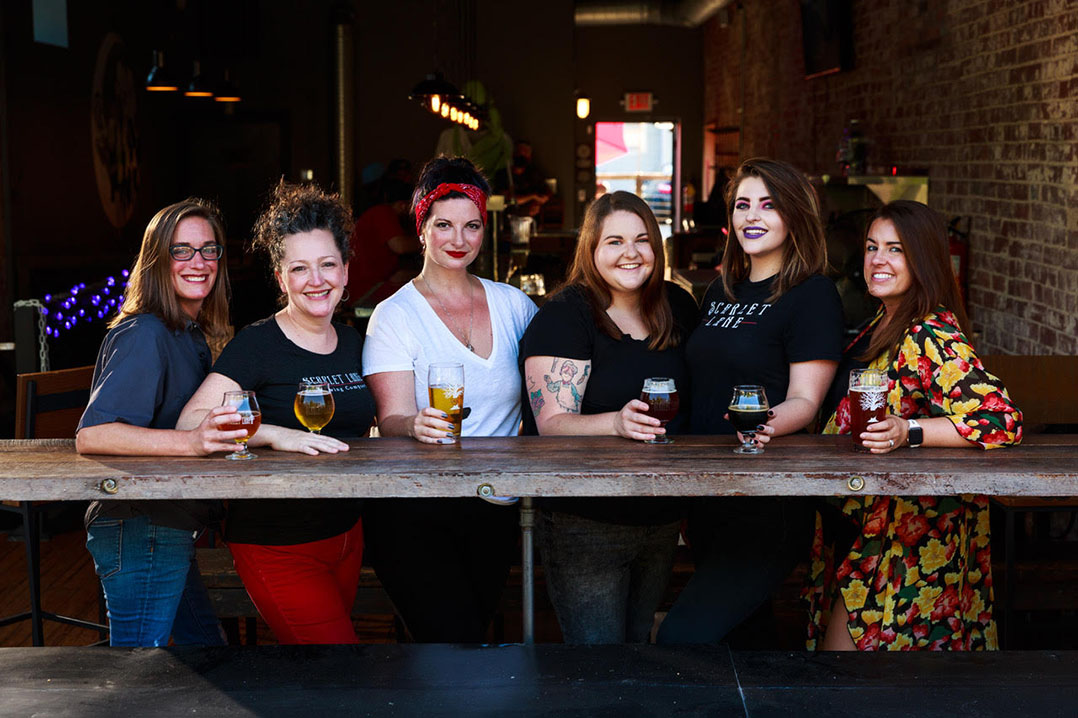 One of Eilise Lane’s missions is to get other women involved in the brewing business. Eighty-five 85 percent of her leadership team is female.

“Just as Eilise has been a mentor to myself, the goal is for me to provide mentoring opportunities to others within the company,” she said. “I will also be continuing education opportunities through internships and external workshops.”

Hull said part of her job is changing the perception that brewing and beer are male domains.

Prior to the COVID-19 pandemic, Hull said she and Lane had planned a number of fun and empowering events at the brewery that had to be postponed.

“We both hope to move forward and build on those plans next year,” Hull said. “We also have wonderful partnerships with multiple female-led groups, such as Girls Pint Out and Pink Boots Society that we will continue to support and work with.”

Hull, who has worked for Scarlet Lane for 4 1/2 years, also is in charge of the brewery’s social media platforms. Hull said the majority of people she interacts with are female.

“It’s exciting to see the awareness and excitement from women has increased,” Hull said.

Hull said Lane being a female brewer and owner encourages men and women to give Scarlet Lane a try. Hull said she became a beer lover when craft breweries first became popular.

“Unfortunately, that accessibility doesn’t always come with an open mind,” Hull said. “I’ve experienced sexism on more than one occasion when it comes to my beer choice versus the perceived beer choice. I have definitely wanted to change the perception of the female beer drinker and that IPAs or stouts aren’t just for men and neither is the brew deck, or any position in the production facility.

“Entering this industry can be a bit intimidating as a woman. We want to change that and help beer evolve with the times.”