The City of Fishers will be a little brighter soon, as the Fishers Arts & Culture Commission recently approved several new art projects throughout the Nickel Plate Cultural District.

The funds were acquired through the sale of the Meyer Najem building at 11787 Lantern Rd. According to a press release from the Fishers Arts & Culture Commission, Fishers received proceeds from the sale because of the Economic Development Agreement negotiated between the city and Meyer Najem in 2012. The agreement included a provision stating the city would get its proportionate share of profit back to the Town Hall Building Corp. based on the provided incentive should the company refinance or sell the building. Earlier this year, the building was sold to an investment group and the city received its share of the profit.
The Fishers Arts & Culture Commission’s master plan was completed in November 2019, and residents identified permanent art installations as a top priority.

“We spent a year on the master plan trying to figure out what the community members wanted, and public art was a big part of that,” Fishers Arts & Culture Commission chairperson David Decker said. “So, we figured out how to implement that and give them what they wanted.”
Quick-action projects include new Edge parking garage banners, a mural for the Fishers Police Station, art features at Holland Park, painted electrical boxes and an Indiana Black History Temporary Art installation. The temporary art is the first project to be completed. Muralists Koda Witsken and Israel Solomon are the artists for the project.

Witsken met Solomon when Solomon was completing his George Floyd mural in downtown Indianapolis on Massachusetts Avenue. Both artists will complete half of a mural of jazz musician Wes Montgomery.

“(Solomon) has a geometric style and I only use soft organic shapes, so to put them side by side would be cool to unite our styles and celebrate unity,” Witsken said.

When complete, the panel will be displayed on a mobile wood structure.

“It’s going to move all around the state to bring communities together, and it’s going to start in Fishers,” Witsken said.

When complete, the mural will be on display outside of Fishers City Hall. It also will be displayed the courthouse in Noblesville, Elwood City Hall and various places in Irvington as well as Hub & Spoke in Fishers.

“He’ll be all over the place,” Witsken said of the mural.

The City of Fishers is fully funding the mural at $2,000. It will continue traveling until September 2021. After that, Fishers will own it. An RFP recently was released for the police station mural, which will be a1,000-square-foot piece on the back of the police station garage that boarders the Nickel Plate Trail, which is being development. The mural is inspired by the service of the U.S. Military and Fishers public safety departments, including police and fire. Decker said the Holland Park piece won’t be a mural but will be more interactive. Four to six more electrical boxes will be painted throughout the city. The Edge banners will consist of eight 24-foot by 10-foot banners.
The two signature projects will be a gateway feature at 116th Street and Interstate 69 in the median west of the I-69 interchange bridge, and an interactive art piece at the Hamilton East Public Library at the future location of the Nickel Plate Trail. The library interactive piece is slated for completion in 2021. 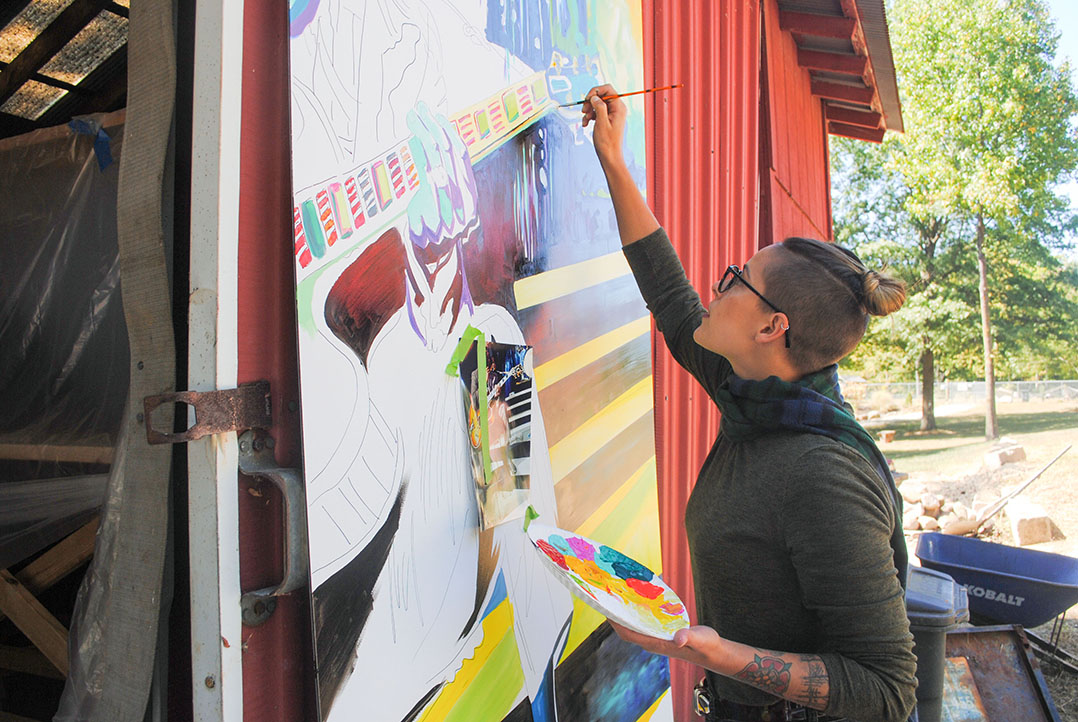