You are at:Home»Current in Westfield»Westfield Community»Sen. Young touts merits of RESTART Act

That, like many other things, was switched due to the coronavirus pandemic, so the Republican addressed the crowd through a large Zoom screen at The Club at Chatham Hills in Westfield. 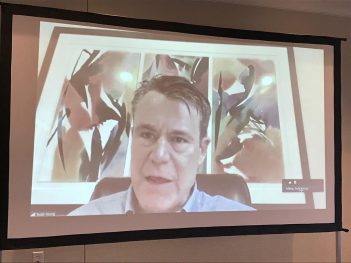 Sen. Todd Young appears at the Westfield Chamber of Commerce on Zoom. (Photo by Mark Ambrogi)

“One was able to get a window into one doesn’t need to attend Harvard or Yale to be clearly qualified for a seat on the highest court in the land,” Young said.

The Republicans have a 53-47 edge in the Senate. However, 35 seats are up for reelection Nov. 3, and 23 are Republicans.

“I’m in control of Republican efforts to keep control of the Senate,” Young said. “Let’s just say it’s a jump ball as we say in the Hoosier state. There is still a lot of campaigning to go in battleground states.”

Young said he was glad to attend a Westfield gathering.

“I grew up in Hamilton County, so this is a group I’m happy to be addressing,” the 1990 Carmel High School graduate said. “I’m the son of a small business owner and I understand the challenges of growing business, although I have to say we were never faced growing a business in the middle of a global pandemic. My brother purchased that business, and he continues to work through all those challenges. I still identify as a conservative. There are times where you need to elevate certain institutions and draw on their strengths. Conservatives believe in institutions. We conservatives actually should recognize that in emergency circumstances we have to depend on our government, not just during times of war or military conflict.

“But in this case, a serious economic downturn that was and exacerbated by necessary public health measures that prevented people from going to work or to shop the way they did previously. We responded boldly with the Paycheck Protection Program that saves tens of millions of jobs around the country.”

Young said the PPP was based on the premise the virus might only be around for a couple of months until health officials determined a way to contain, which obviously hasn’t happened.

“I’ve been focused intently in the wake of losing 120,000 small businesses permanently in this country, and that’s a low-end estimate, that we to help our hard-hit businesses,” Young said. “We need a Paycheck Protection Program that lasts a little bit longer on the back end of this virus that has targeted our hardest hit businesses, then it would provide a level of forgiveness to those hard-hit businesses based with on amount of revenue loss they have experienced.”

Young is co-sponsor of the RESTART Act with Sen. Michael Bennet (D-Colo.).

“I think it has a good chance of passing, probably after the election,” Young said. “More than 74,000 Hoosier businesses benefitted from PPP and I know there will countless businesses that will benefit from small business assistance. My hope is this will be part of a broader coronavirus relief package, which we will return to our first order of business after the election if we are unable to do it before.”

Young said he doesn’t believe House Speaker Nancy Pelosi wants to come up with a compromise on a relief bill before the election.

“I think her calculation is that will work to the disfavor of the Democrats in the election if President Trump should be able to tout his leadership in closing out one of these deals,” he said. “I regret I have to say that.”