Countless business owners have struggled this year due to the COVID-19 pandemic, but that hasn’t kept Westfield resident and Root 31 owner Angela Gapinski from opening a second store.

Root 31 is a plant boutique and floral studio on Park Street in downtown Westfield. Gapinski leases the space from business owner Bob Beauchamp, who also owned a building on Jersey Street, which has a backyard bordering Root 31’s backyard. The Jersey Street building previously housed a hair salon, but after the owner retired, it became vacant.

Beauchamp assumed Gapinski might want to use the space for storage for Root 31. However, when Beauchamp made the suggestion to Gapinski, she had temporarily closed Root 31 shortly before its one-year anniversary due to the COVID-19 pandemic.

“Bob called and said, ‘I think this would be a good opportunity for you for storage,’ since we don’t have much space over at Root 31. But I thought it was crazy, honestly,” Gapinski said. “I was like, ‘My business that’s less than a year old is closed due to a pandemic. That’s insane. I don’t even know if I’m going to be open come the summer.’ But he kept calling, basically, so then we came over and looked at the space and thought there was so much potential to create something really unique that no other downtown gets.”

Gapinski said having the yards connected created an endless list of possibilities for the space. A room inside the Jersey Street building has been remodeled to provide classroom space. When the building was a residence, the room was a garage.

“Nobody gets a greenspace between their two buildings, so then when we saw the actual house, we immediately knew that the garage classroom would be amazing,” Gapinski said.

The new store is called Remedy. It opened on Small Business Saturday and will remain open from noon to 5 p.m. daily until Christmas Eve. Then, it will close for further remodeling of the outdoor space until spring.

“We are a small business supporting lots of other small businesses,” Gapinski said of Remedy. “It’s a sister store to Root 31, so we are hyper-focused on plants, flowers and plant-related items at Root 31, and this allows for us to have more space for a lot of the makers.”

Gapinski said Remedy sells “all the things we wish we could carry at Root 31 but don’t have the space for,” such as candles, journals, dish towels, decorative rocks, art prints, cards, skin care and shower and bath items.

The name “Remedy” was chosen so customers could feel good about their purchases.

When Gapinski opened Root 31, she began attended traveling art and craft pop-up shows and met many artists. Many of those same artists now have items for sale at Remedy. Ninety-five percent of Remedy’s products are made in America, including items needed for the store’s remodel.

“We have been intentional about light fixtures and even our refrigerator,” Gapinski said. “We wanted to be intentional with our fixtures and still supporting as many businesses as we could in America.” 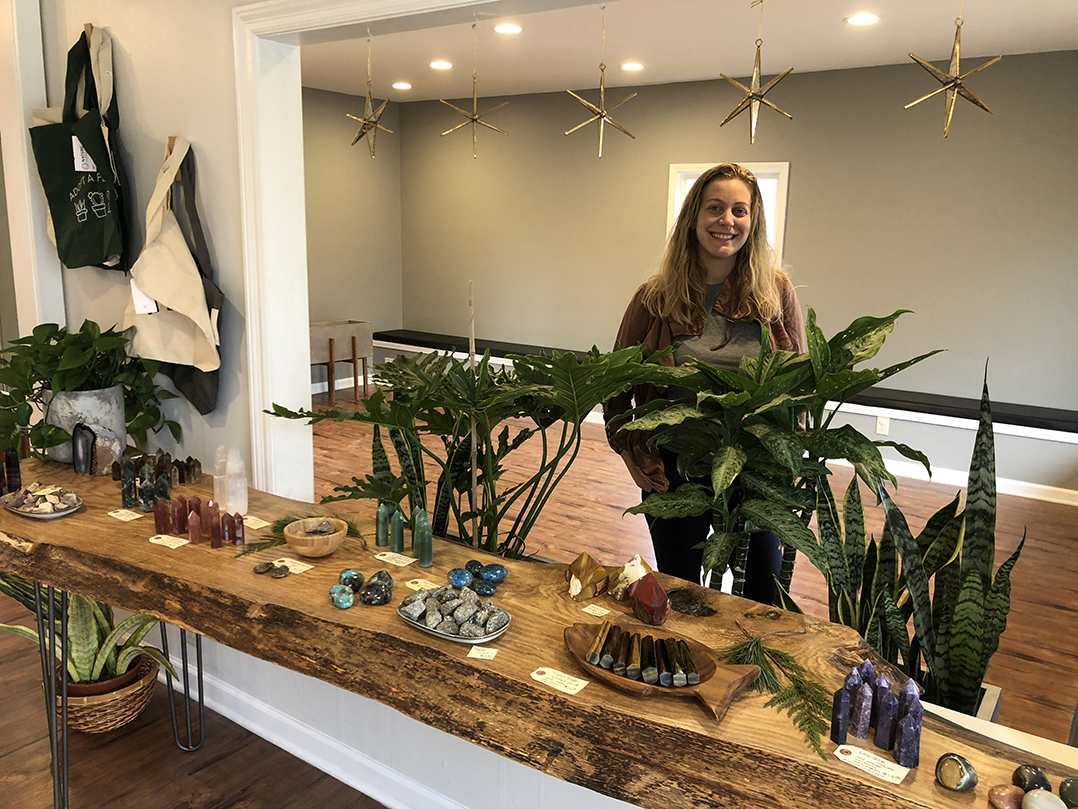 During a brief closure between Christmas and spring 2021, Remedy owner Angela Gapinski plans to further remodel the space at 203 Jersey St.

Gapinski is in the process of obtaining a beer and wine license to offer beverages during classes and sip and shop events. Root 31 will offer classes such as floral arranging, terrarium building and wreath building in Remedy’s new space, and there will be other classes, too, such as how to dry herbs and how to use herbs in cooking, beekeeping and gardening.

“That’s why we wanted to keep this really versatile, so other people can rent out the classroom and other makers in the store that want to do classes. Like a soap maker can do a class,” Gapinski said. “It gives us a way to highlight some of our artists, too.”

The space will be used as a temporary art studio until spring. A garden with seating will be constructed in the greenspace behind the building.