The Humane Society for Hamilton County’s longest resident was able to come home for the holidays. 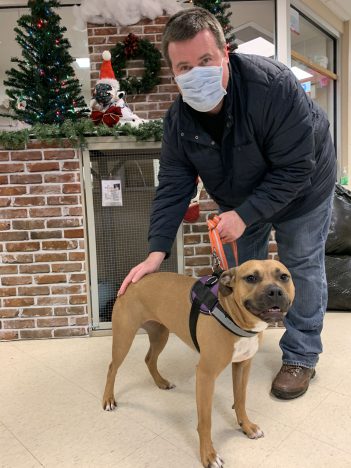 Taylor, a dog who has been at the HSHC since January 2019, was adopted by Westfield resident Sean Barr on Nov. 30. Barr fostered Taylor for a month before deciding to adopt her.

“She’s been here since January of 2019, so almost two years,” HSHC Director of Marketing Max Williams said. “She’s only 2, so that’s pretty much her entire life.”

One of the reasons Taylor had difficulty with adoption is because she had a genetic defect that led to chronic pulmonary disease similar to cystic fibrosis in humans.

“She has the equivalent of between asthma and cystic fibrosis in humans, which causes her lungs to fill with fluid,” Williams said.

Taylor’s adopter would have to provide breathing treatments twice a day and other methods to break up the mucus in her lungs. Prior to adopting Taylor, Barr’s 17-year-old Shiba Inu recently died.

“He wasn’t sure if he was ready for another dog, but one day he was at work and thought it was time, so he started looking around on the internet and came across Taylor on our website,” Williams said. “He read her story and he felt like she was the right dog for him, so he reached out.”

Taylor required a thorough adoption vetting process due to her medical condition.

“We had to make sure it was the right fit and someone who was going to provide care for her and her needs,” Williams said. “(Barr) was ready for it. He fell in love with her.”

Taylor is the HSHC’s longest resident ever. When she went home with Barr, the volunteers and staff lined up outside to wish her goodbye.

“She was a shelter favorite, and we just celebrated her second birthday,” Williams said. “Two years is a really long time, and it was just hard because people were scared of her disease.”

For more or to view a list of adoptable pets, visit hamiltonhumane.com.