You are at:Home»Current in Carmel»Carmel Community»Festive cone goes missing from Carmel driveway, again

Motorists would often try to turn around in Jim and Anita Siccardi’s long driveway, which became a nuisance. So, the Carmel couple started putting a traffic cone at the end of their driveway to discourage turnarounds. 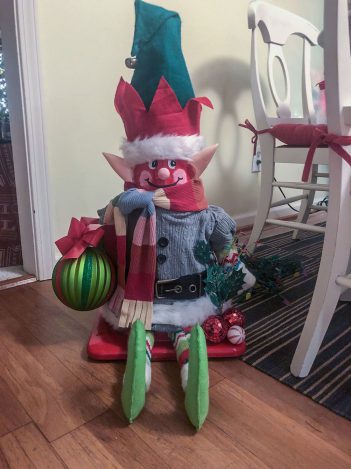 A neighbor playfully stole it and then returned it as a decorated cone. That neighbor moved several years ago, but another neighbor, Peggy Peretich, has taken it to another level during the past seven to eight years. She makes a decorated cone for different holidays and seasons.

Unfortunately, her creation of a Christmas elf cone was stolen Dec. 13.

“It wasn’t even there three days. They seem to steal the Christmas ones,” Peretich said. “Someone must have a collection in their house, because those are the ones that seemed to get stolen. Last year’s Christmas cone got stolen, too. I had a snowman one year that got stolen. (There have) been a few others over the years that disappeared.”

Peretrich was particularly upset about losing the elf.

“That one took me a really long time to do,” Peretich said. “Jim might just get an old orange cone out there at this point.”

That would be unusual, because there is always a decorated cone of some sort on the spot. Prior to the elf, there was a patriotic cone for the election season.

She often puts out a Notre Dame cone during the season because Jim is a fan.

“I’ve done political ones,” Peretrich said. “In 2016, I had Hillary (Clinton) and (Donald) Trump faces on cones. I put both up because I didn’t want anyone to know which way he leaned. I always do an Indy 500 one in May.”

Peretich, who has a fine arts degree from Goshen (Ind.) College, has been helped by her daughter, Annie, a 2019 Carmel High School graduate, through the years.