Carmel’s Josh Kirsh has been named the OneZone Volunteer of the Year. 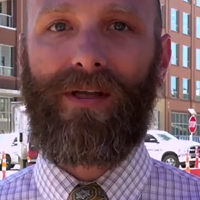 Kirsh is involved in a variety of organizations and committees in Carmel. He has served on the Carmel Clay Parks & Recreation board since 2008 and is a member of the Carmel Plan Commission and the Carmel Active Transportation Committee.

“I’m humbled and honored to be chosen to represent OneZone and receive this award although conflicted,” Kirsh said. “I’m just one small cog in a giant mechanism that works selflessly and tirelessly to serve this great city.”

Since 2017 Kirsh, who is the engineering administrator for the City of Carmel, has volunteered for Bike Carmel and Artomobilia. He has also served as a PorchFest volunteer since 2013.

He might be best known, however, as the “Lead Elf” at the annual Carmel Christkindlmarkt. The event was canceled this year because of the COVID-19 pandemic.

But that’s not the extent of Kirsh’s involvement in the community. During CarmelFest, he serves as facilities director, setting up and tearing down for the event. And, since 2019, Kirsh has served on the Carmel Fire Dept.’s Firefighter’s Foundation Board.

Kirsh said his motto when it comes to balancing all his volunteer efforts is “You have to not say no, it’s a bit of a curse really.”

Volunteering has always been important to Kirsh. His favorite book as a child was “Herman the Helper” about a little octopus that goes around trying to help people.

“I love this city so much. It’s amazing really how it’s emerged into this awesome place, and by default somehow I have emerged into this role. I don’t take it for granted and I don’t take it lightly,” Kirsh said. “Every day I find myself in the midst of conversations or decision-making that helps make the city a little better. I’m not the only one. There’s so many who help in whatever way they can.”

OneZone is the combined Fishers and Carmel Chambers of Commerce. The entities merged in 2015.

The winners will be acknowledged at OneZone’s awards luncheon on Jan. 13, 2021, at Ritz Charles in Carmel. Learn more at onezonecommerce.com.