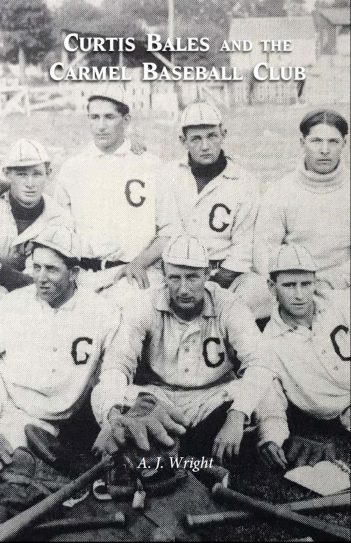 Carmel Clay Historical Society historian A.J. Wright didn’t expect to write a book about Carmel baseball until he discovered how much information was available.

“If there hadn’t been so much information, it would have been a small article or a Facebook post,” he said. “The more I dug into it, there were compelling stories, the rivalries with the Hamilton County teams, how much interest there was in the teams. They really supported these teams. Carmel was only a town of 500 (then) and the team is playing at semi-professional level.”

The result was Wright’s book, “Curtis Bales and the Carmel Baseball Club.”

“Boys were playing baseball on the schoolyards in Carmel since at least the 1850s, but there was no record of a Carmel baseball club until 1887,” Wright said. “The club could only play teams that could be reached by horse and buggy or by the Monon. After the turn of the century, a network of interurban railroads, which used electric streetcars, were built throughout the state, and baseball exploded. Teams could now travel much more efficiently. They organized leagues and expanded their schedules. The interurban also gave players more mobility. Those with talent joined semi-professional teams outside their hometown or played for more than one team in a season.”

Carmel had a successful run in the Hamilton County League.

“It was an amateur league by rule, but every club added semi-professional and professional players to their roster, which made it very competitive,” Wright said. “Carmel was fortunate to have a core of strong hometown players, four of whom signed minor league contracts at some point in their career. They took Carmel to the Hamilton County League’s championship game four years in a row from 1904 to 1907, winning the championship in 1904 and 1907.”

Wright said nearly all the players were from Carmel, including star pitcher Curtis Bales.

One game in particular drew a lot of attention. On July 6, 1906, Carmel played host to the Nebraska Indians, a barnstorming team composed of mostly Native American players. The Nebraska Indians had a 151-31-2 record that year, Wright said.

There were a thousand spectators crowded into the park to watch Carmel’s 4-0 victory. Bales was the star of the game, allowing the Indians just three hits.

“Bales impressed the Indians’ manager so much that he signed him for the rest of their tour through the Midwest and East Coast,” Wright said. “That same year, Ed Walsh was making the novel spitball pitch famous during the Chicago White Sox’s World Series winning season. Managers were eager to add spitballers to their roster, so as Bales showcased his talent all over the country, he got multiple offers from minor league teams. In fact, he got so many that he had Carmel’s manager, Henry Roberts, act as his agent. He ended up signing with the Indianapolis Browns (the Indianapolis Indians were the Browns from 1907 to 1910).”

The book is available at the Monon Depot or by emailing info@carmelclayhistory.org to order a copy.