Mark Hall remembers what it was like living paycheck to paycheck.

Hall said he and his wife, Lisa, never had to go to a food pantry but there were times at the end of the week they would eat canned food.

“We weren’t on public assistance,” said Hall, who has three grown daughters. “Lisa was working, and I was working, but back in the early 1990s, there were a few weeks when you’d get to Wednesday and there is no money for food. So, dinner was Dinty Moore Beef Stew and a baked potato. If we were in that spot, there has to be a lot of others in that spot.”

So, 11 years ago, they started performing food charity work. It is the corporate charity of the couple’s businesses, TalentLogistiX, Pinpoint Resources and TechTrades. The Halls had supported Shepherd Community Center in inner-city Indianapolis for 10 years. Hall said they realized they needed to do something in Hamilton County. They have lived in Noblesville for more than 30 years.

Hall learned of a program the Nazarene Church conducts in Louisville of offering free outdoor food pantries based on the honor system.

“So, we completely ripped off the idea and we hope added to it,” said Hall, who decided to launch FeedingTeam.org.

Three new pantries, including one at International Association of Fire Fighters Local 4416, 399 South 14th St., Noblesville, were launched Dec. 11 under the FeedingTeam.org banner, bringing the total to 12. The other two new pantries are at Laura Hayden’s School of Dance and Indiana Academy in Cicero. Hall said they could have nearly 20 by summer of 2021.

“We had six ready to go and thought we were going to be done,” Hall said. “Then COVID hit, and we had to rush them out. We had no food except for 56 cases of Gatorade and 60 to 70 cases of popcorn. That’s all we had at the time.”

Hall said high school students taking classes at Ivy Tech built the pantries and Gaylor Electric painted them. The pantries are open 24 hours a day. They are large enough to hold several hundred meals with a plexiglass front so people can see if there is food inside.

“Our business takes a piece of every sale and we go buy nonperishable food items and put in the pantries every Friday,” Hall said. “The locations are designed to match places where residents are right at or just above the poverty level. They are not designed for indigent or homeless, although many indigent or homeless use them. They are working folks who just get to Wednesday and they run out of money until they get paid on Friday. It’s designed to have families get by for two, three, four, five, six meals until they get the next paycheck.”

Hall said anyone in need can use the pantries. 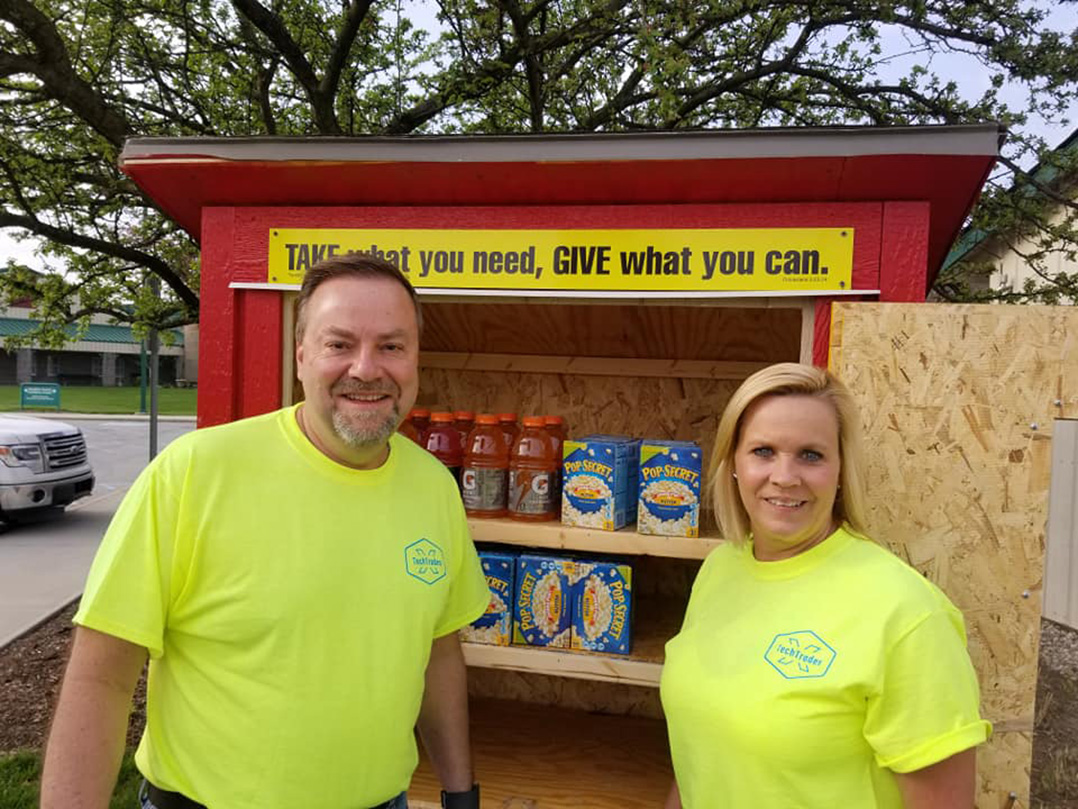 Mark and Lisa Hall pause in front of one of their outdoor food pantries.

“Teaching children the importance of charity, specifically supporting their

neighbors, is one of the most rewarding parts of what we do,” Lisa said. “Watching parents together with their children stocking food that they donate in the pantries warms my heart.”

Two of the couple’s daughters, Amber Hall and Alyssa Thomas, both Noblesville residents, help with the program.