The Geist Reservoir Tax Opposition Alliance’s perseverance paid off for the organization, a group of Geist-area neighbors formed after a conservancy district was proposed in 2019 for Geist Reservoir and several surrounding neighborhoods.

Hamilton County Superior Court 5 Judge David Najjar ruled in favor of GRTO Alliance Jan. 4, saying there was substantial enough change to the powers and abilities of a conservancy district due to the recent passing of a new law, so the Geist conservancy district was dismissed.

“(The GRTO Alliance) began as a group of neighbors who had opposed specific items in the conservancy proposal,” group organizer and Geist resident Matt Russ said. “Most of us didn’t disagree with the idea of a conservancy district, but we felt the plan was very imbalanced with regards to the types of benefits that would be gained through the conservancy and through the taxation.”

A conservancy district can tax homes within a defined area and use dollars within the district. For example, the Geist Reservoir Conservancy planned to use the tax revenue for projects such as adding lighted channel markers to the reservoir, treating and containing aquatic weeds and creating easier lake access.

The conservancy was filed under original conservancy laws that were in place in late 2019. But during the petition process, the GRTO Alliance worked with state legislators to add amendments to Senate Bill 430 regarding conservancy districts.

“So, what we did when we looked at the Senate bill is, we looked at it and thought we need to put some safeguards in place in the event the conservancy became reality.”

Some of those safeguards include eliminating imminent domain threats and ensuring tax caps, made it into the final bill that was signed into law in July 2020.

Russ expected the petitioners to withdraw the conservancy district petition and refile it under the new bill, but that didn’t happen.

“Instead of withdrawing the petition and starting over again, they tried to file an amendment and amend the original petition so it would be under the new law, and that’s what we had taken issue with,” Russ said.

Russ said roughly 1,400 people signed the original petition, but the majority of signatures were  gathered in early 2018, prior to the passing of Senate Bill 430.

“We thought those people should have a say,” Russ said. “How can you then say those people that signed three years ago are still in agreement with this new type of district?”

Representatives from the Geist Reservoir Conservancy District did not respond to a request for comment from Current, but they did post the following statement on their Facebook site on Jan. 4 after the ruling:

“Today, the Hamilton County Superior Court ruled that because the law establishing reservoir conservancy districts in Indiana was not passed until 2020, the signatures gathered relating to our original petition were not valid with respect to the petition as amended in 2020. Thus, the Court dismissed the amended petition. In doing so, the Court ruled that the work to reach agreements with Marina Limited Partnership and Citizens Energy Group coupled with the tax caps and limitation of eminent domain changed the nature of the conservancy district enough that new signatures would be required. The Geist Conservancy District Steering Committee believes that our supporters, from day one to the present, are still in favor of the establishment of a conservancy district to preserve the long-term health of Geist Reservoir and we thank you for that continued support. We are evaluating the Court’s order and our options and will communicate our next steps in forthcoming days.” 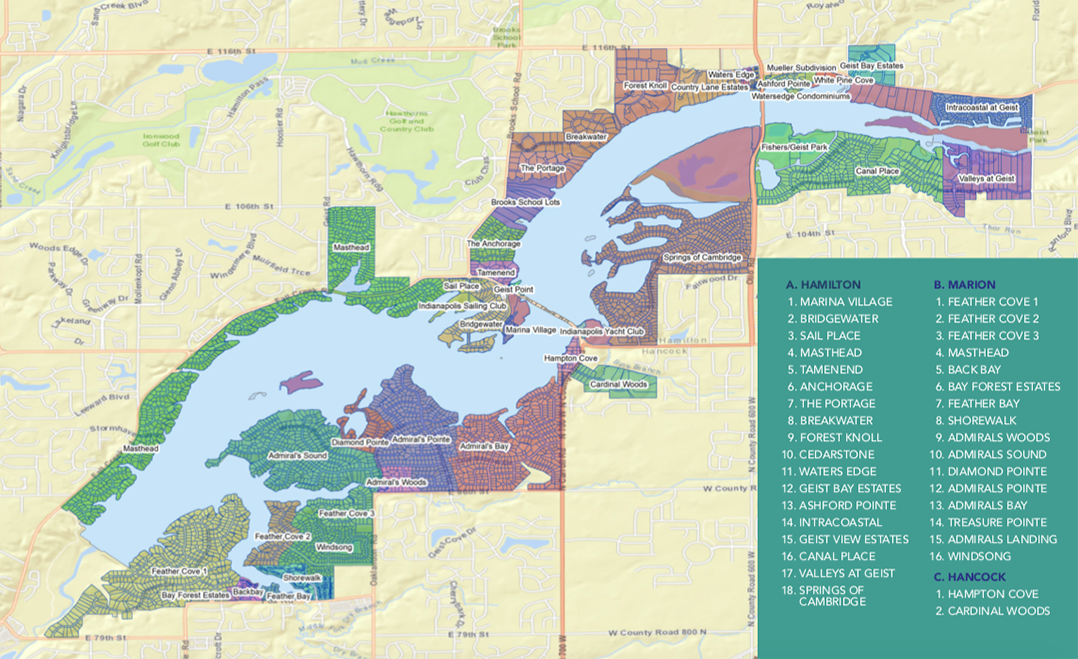 A map of the proposed conservancy district prior to its dismissal. (Submitted image)

Refiling in the future

Although Geist Reservoir Conservancy District representatives didn’t respond to a request for comment from Current Publishing, opposing group Geist Reservoir Tax Opposition Alliance organizer Matt Russ said conservancy organizers do have the ability to refile their petition, and he expects that they will.

“They can certainly start a new petition, and that would require them to gather new signatures,” Russ said. “What I would say is, if they do that, our hope is that they would work with us on a plan that benefits everyone equally, and if there’s not a way to do it so everyone (is) receiving equal benefits, then (those residents) should not be in the conservancy district.”

Russ said he wants to meet with representatives of the conservancy district group and work together to move forward.

“I’m always somebody who wants to find a path that is agreeable to everyone and a way to move forward together,” Russ said. “There’s a lot of division in our world right now, and the last thing we need is division in our local community. We want to move forward together, and we certainly don’t want to spend the next several years arguing over this.”