After a year-and-a-half of college, Anna Skinner decided college might not be for her, but writing and reporting certainly was. 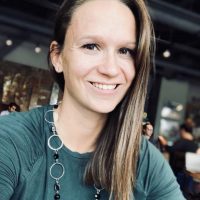 “I took a major chance there,” Skinner said. “In return, Current took a chance on me, and it’s grown into this incredible relationship with wonderful opportunities. I am forever grateful for the hard-working group of people that make these newspapers work. They are not only my mentors, but also my dear friends.”

Skinner is managing editor of Current newspapers in Fishers, Geist, Noblesville and Westfield. In addition, she writes weekly columns on dining out and specialty cocktails. Her work has caught the attention of 2021 Indy’s Best Brightest Awards, where she is one of the finalists in the media, entertainment and sports category. The awards are created by Junior Achievement of Central Indiana. The event honors 100 of central Indiana’s most outstanding young professionals, age 40 and under, in 10 different industries. The virtual recognition event is set for 7 p.m. March 11.

“Being in the media industry, some of my friends have been named an Indy’s Best and Brightest finalist, and I was always so excited for them when I learned they were on the list,” Skinner said.

The 26-year-old Fishers resident didn’t feel that recognition was in her reach because Current Publishing focuses on four Hamilton County cities, Zionsville and Geist area.

“When I found out I had been nominated and chosen as a top 10 finalist in the media category, I was simultaneously surprised and elated, especially when I saw the other nine finalists and the big names that were on the list right alongside mine,” Skinner said. “Media industry people don’t get recognized a lot, especially those who work in journalism, so it’s always wonderful to see the impact you make. It really means a lot to be recognized, and it just reiterates that the work I do and the work Current Publishing does is important and imperative to Hamilton County and the surrounding areas. Journalists didn’t choose this career for the awards. We do it because we have a passion for our community and a passion for telling the truth. That passion still burns in me six years after joining Current, and it’s why I love my job so much.”

Beyond her many roles at Current Publishing, Skinner was named the youngest and first female to be president of the Westfield Lions Club last summer.