At 76, John Schmid is typically busier than most people his age. 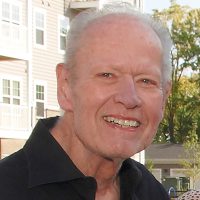 Although Schmid stays busy, he was ready to ease his living situation. He moved from his condo when Encore 55+ Boutique Apartments, 6675 E. 75th St., opened in Indianapolis in August 2020.

“If something goes wrong, I don’t have to fix it,” he said. “It’s on one floor. I had steps before. I’m on the first floor and I’m not far from the entrance. It’s enough space for me.”

Schmid calls the decision to move to Encore 55+ Apartments the best he has ever made.

Schmid learned about Encore from his daughter, Jordan, who lives 5 minutes away.

“They’re very well kept, they have a good staff,” Schmid said. “It’s a pleasant, quiet atmosphere. They have different small events for the residents, although I’m probably much busier than a lot of the residents. I’m in and out a lot more.”

Schmid said there is a workout room and plenty of room to walk.

“There is a lovely community room and movie room,” Schmid said. “It’s very quiet here. The maintenance is quite good. They are very attentive to things.”

Along with the fitness center, there are pickleball and bocce courts. There also is a dog park.

Not surprisingly, Schmid is ready for the COVID-19 pandemic to end and musical performances to begin.

Schmid, a tenor who has two degrees in voice from Butler University, has performed in and conducted musicals in the past.

“I’ve done some musicals and conducted musicals,” he said.

Schmid has prepared the Indy Opera choruses for more than 100 productions of more than 60 operas.